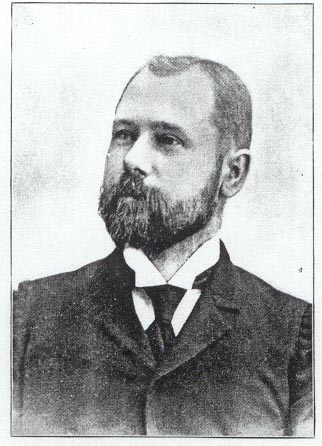 B. S. Stephenson, the first jeweler of Redlands, and still in the jewelry business in this city, was born in Yorkshire, England, but came to the United States when a young man. After living for several years in the Middle States and after a six months’ trip to England, he went to St. Louis and then came to Redlands, in July, 1886. He soon afterward started in business in what was then the house of J.S. Edwards, on Cypress Avenue, where he and other young men bac’hed it.  In August the present town site was decided upon.  Anticipating the survey a short time, Mr. Stephenson built a small business structure just back of the present office of The Facts.  After the survey he found that his building was 100 feet from the State Street line, accordingly he moved it to the southeastern corner of State and Fifth streets, and subsequently located it on the rear of the lot, on Fifth street, where it still remains.  This building was the first business house located after the boundaries of the streets were determined.  The only other establishments then in existence were Dan Findlay’s meat market, and Wilcox’s blacksmith shop.  September 1, 1888, Mr. Stephenson moved into his present place of business, 16 East State Street.  December 13, 1887, Mr. Stephenson was married in Trinity Church to Miss Selma White, a native of England, whom he had know in the East.  This was the first church wedding in Redlands.  Mr. Stephenson was one of the first vestrymen of Trinity Church.