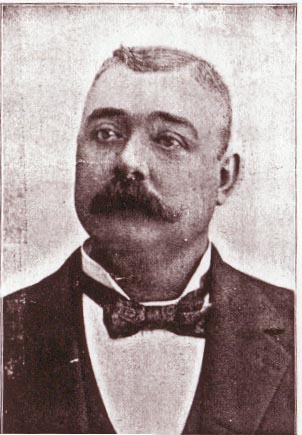 In a literal sense Albert Edwin Taylor has perhaps had more to do with laying the foundations of Redlands than any other man, for he was one of the first to arrive on the scene of the future city, and as a contractor and bricklayer has had to do with a great many of the principal residences and business houses.  Mr. Taylor was born near Toronto, Canada, August 17, 1862, passed his early boyhood there, and then went to Toronto, where he learned a trade as steamfitter, taking up bricklaying and contracting after he came to Redlands.  Some of his earlier business experience was in St. Paul and Winnipeg.

He came to  Redlands June 12, 1882, and with other young men went into camp on the zanja.  In January, 1884, he built the first house in the present town of Redlands, after the town plat was filed, a building first used for a residence and afterward for a barn.  After this Mr. Taylor took many contracts for building brick blocks and for the brick or stone foundations of many other buildings.  He was foreman on the Bear Valley dam from its commencement to its completion.  Among the principal buildings with which he was connected are the Windsor annex, the McGinness and Phinney blocks, the annex to the McAbee block, the First National Bank annex, the Feraud building, the first part of the High School building, the Academy of Music, the Y.M.C.A. building, the Hargraves block, the Cave & Reeves block, and more recently, the brickwork for the Mitchell block, the Redlands Preserving Company’s building and the Orange Growers’ Association’s building.  He built for himself a brick block on the corner of State and Sixth streets.  For the past twelve years he has also been a manufacturer of cement pipe.

Mr. Taylor was married December 20, 1884, at Los Angeles, to  Miss Nellie Gowland, a native of Brantford, Canada .  They have four children, two sons and two daughters, all born in Redlands.  Mr. Taylor is an Odd Fellow, is past master of Redlands Lodge No. 300, F. & A.M., and also a member of the Royal Arch Chapter and the Delta Lodge of Perfection, A.& A. Scottish Rite.