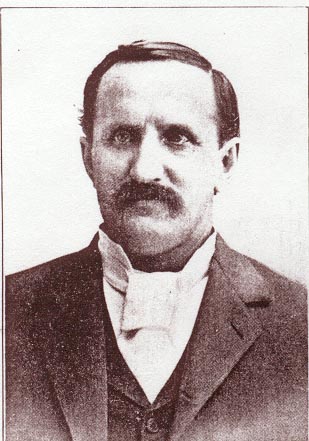 One of the earliest citizens of Redlands is Chas. E. Truesdell, who was born at Holden, Mass., July 28, 1857.  He lived in Massachusetts until 20 years of age, receiving his earlier education at the Hitchcock Free High School, at Brimfield.  From June 1877, to January 1882, the United States government employed Mr. Truesdell in the weather bureau.  During this time he was stationed at Norfolk, VA; Savannah, GA; Newport, R. I; Breckenridge, Minn.; and Yuma and Wickenburg, Arizona.  While thus engaged Mr. Truesdell studied law and was admitted to practice while residing at Breckenridge, Minn.

In January 1882, he came to Redlands and has resided in this city ever since as one of the young men who came early and devoted their energies in various ways to the building up of the city and its surrounding territory.  While the population of Redlands was still almost nominal, Mr. Truesdell engaged in horticulture and in the sale of real estate, and afterwards resumed the practice of law.  For the first seven years of his residence here he was principally occupied with the former lines of business.  During this time, he was a director in the Redlands Water Company, one of the chief factors in developing Redlands.  Mr. Truesdell’s first office was on the present site of the Academy of Music and was opened in May 1887, by Warren & Truesdell.  Later he built an office where Thaxter’s pharmacy now is, and still later was compelled by the march of progress to make another removal.  This time he went “to what was then away out town,” and built the office where he is located now.

Mr. Truesdell’s marriage to Miss Rebecca Cox, which occurred July 8, 1885, was the first marriage in Redlands where both husband and wife were at the time residents of this city.  Mrs. Truesdell is a native of England and had come to Redlands with friends, arriving here at about the same time as her future husband.  They have four children, three girls and a boy, all born in Redlands.