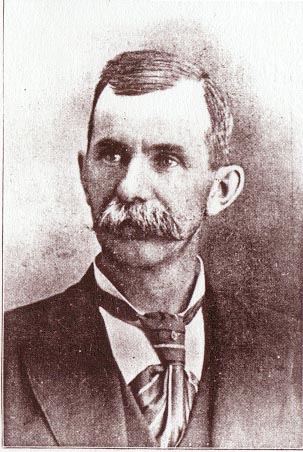 Lee Wilmarth was born at Buffalo, N.Y., in 1849, but went to Peoria, Ill., in 1861 and lived in that city until 1877.  His first business experience was in a dry goods store where he remained until twenty-one years of age and then learned a trade as painter, grainer and decorator.  This he has followed all his life since, except during the period when engaged in business in Redlands.  Mr. Wilmarth was married at Peoria, in 1875, to Laura May Rhodes, a native of Vermont.  In 1877 they removed to Des Moines, Iowa, where they resided until 1884, when they went to San Antonio, Texas.  There Mr. Wilmarth was employed at the government post for two years, during which time he grained and decorated all of the government buildings, from the house occupied by Brigadier General Stanley to that which General Miles left, and which became the residence of Col. J.B.C. Lee, his successor in command at the post.  After this work, Mr. Wilmarth came to California and went first to San Bernardino.

After a brief residence there he returned East for two years and then came back to San Bernardino.  During his two periods of residence in that city, he did his full share of work in his line, being employed upon many of the principal residences and public buildings constructed during this time of rapid growth.  Among the dwellings which he decorated was that of H. L. Drew, president of the Farmers’ Exchange Bank.  Mr. Wilmarth came to Redlands from San Bernardino in the fall of 1888 and worked at his trade for three or four years, putting the finishing touches on many of the finest residences in this city.  Later he managed a paint store on Orange street, for two years, for A.P. Morse, and then opened a store of his own, on East State street, in which business he continued for four years and until October 12, last.  Mr. Wilmarth is a member of the Odd Fellows and K.P’s.  When he first came to Redlands he built a tasty residence on Olive Avenue, which is still his home.