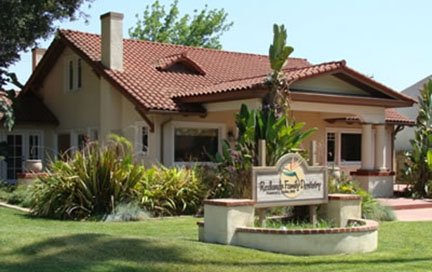 On the corner of Brookside and Buena Vista, this beautiful house is currently the home of Redlands Family Dentistry. In a Redlands Facts article dated March 4, 1920: “Gordon L. Nelson has sold his handsome home on Fern Avenue to John G. Wilcoxson. Mr. and Mrs. Nelson have moved temporarily to a bungalow at 144 Myrtle Street and later he plans to erect a new home on his lots at the corner of Brookside and Angelica.”

Gordon L. Nelson, an Orange Grower, had water hooked up to his property in September of 1920, on Lot#2 of the Pettits Tract. Later that fall the house was built. Mr. Nelson was still in residence as late as 1942 when he pulled a permit to install a water heater. O.J. Fowler was the owner in 1954 according to permits from that time. In 1968 Dr. Paul Gleason was the owner and pulled permits for a kitchen and garage remodel.

This Spanish Revival home has some Craftsman features as well.  The red-tile roof is accented with two small swept vent dormers.  Four plain Doric columns support the sun porch with a typical colonial entrance.  The home is plastered, two-story, with a sizeable fireplace.  Protruding rafters supported by four by four supports give the home a Craftsman bungalow style.  The red-colored concrete porches, garden pedestals and white concrete walls lend to the Spanish Revival home.  This adaptive reuse features a garden walled planter with a complimentary sign.  The plantings and lawn are all well-manicured giving the home/office an attractive Brookside business.

Dr Frederick Hoffer is the current owner. When Dr Hoffer first considered making this old house his dental office, the woman who was living there was no longer able to take care of herself or her 50+ cats. There was cat waste inches deep throughout the house. It had absorbed into the walls and the wood flooring. This almost kept Dr. Hoffer from purchasing the house. In May of 2000 he was issued a permit for interior demolition and in September of that same year was given a permit to do Tenement Improvement for his dental office. The landscaping was poorly maintained also. Dr. Hoffer found one dehydrated Bird-of-Paradise plant in the midst of overgrown weeds and bushes. He saved that plant and uses it’s flower in he business logo.
503 Brookside is a great example of Adaptive Reuse. The Redlands Area Historical Society commends Mr. Hoffer for his care and attention in saving and maintaining this beautiful house.