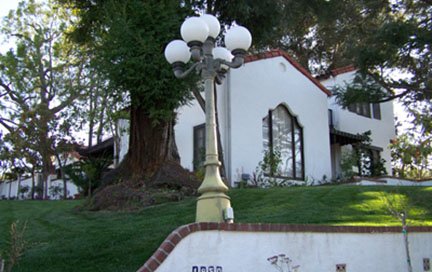 Upon the crest of Rossmont Drive sits an exemplary two story Spanish Colonial Revival home, part of the Country Club Park subdivision originally developed by A. Gregory in the 1920’s. The architectural style, once referred to as “California homes for California people”, finds its roots in the Mission Style of architecture from 1888 to 1918, with the huge popularity of Helen Hunt Jackson’s novel Ramona (published in 1884), a fictional account of life in pre-American California for Californios and Indians. A resurgence of the style evolved from the San Diego Panama-California International Exposition of 1915 in Balboa Park. This particular residence showcases the design intention of indoor and outdoor living, a true Californian design feature.

The home’s irregular plan features classic Spanish stucco walls, red tile gabled roof with close eaves, and exposed rafter ends at the slightly cantilevered upper story. A brick paver offset stair leads to the single front door with eight quatrefoil recessed decorative panels and a rounded stucco surround, flanked by multi-paned windows covered by decorative wood railing and set with a mansard shaped projected bay top and bottom. Windows throughout the home are double hung sash or multi-paned casement. One of the most striking features of the home is the Moorish inspired front window with decorative shape in fixed panel and multi-paned side panels. Important to the overall design are the small walkways and private patios created by the informal layout of the home. This home takes full advantage of its beautiful setting and views and perfectly demonstrates how true Spanish Colonial Revival embodies the California lifestyle. This residence also has a guest house and detached garage.

1850 Rossmont was the home of the Blodgets for approximately 20 years, 1926-1948. A New York native who was persuaded to come to Redlands by C.P. Earley of Mutual Orange Distributors, Walter Blodget became their field manager and foreman. His sudden death at age 53 of a stroke on August 23, 1935 made news in The Redlands Daily Facts newspaper, where he was remembered as a man of good, strong mind and heart. Citrus men from all over Southern California came to Redlands for his funeral, which was noted in the August 24, 1935 Redlands Daily Facts and listed over 56 pallbearers. The editorial page refers to how Blodget “glorified the orange” and gives him credit for the beautiful rack displays at the National Orange Show and Pomona Fair.

His widow Clara and daughter Barbara continued to live in the home. Clara was a bookshop manager for Harris Co. In 1949, Mr. and Mrs. N.B. Munsey’s renovation of the home was featured in the December 17, 1949 Redlands Daily Facts. Additional owners have been Jack and Betty Cooper, as well as John C. and Marion Ferrall.

Written and researched by Kathleen Beall and Janet Cosgrove