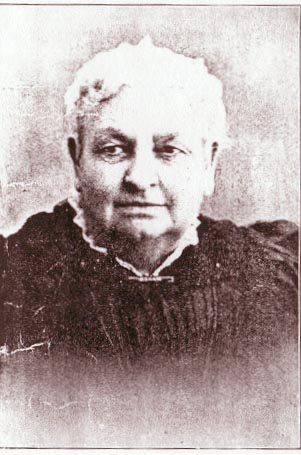 Among the present residents few have a more vivid recollection of the early days, than Mrs. Ellen Brown Seymour, who came here in August, 1881, and took an active part in many matters involving the welfare of the young and growing community.  Mrs. Seymour, a cousin of Frank E. Brown, was born in Norfolk, Litchfield county, Conn., April 11, 1832.  Her great grandfather was a son of Peter Brown, one of the passengers on the historic voyage of the Mayflower.  Her early education was obtained in the common schools and the academy of her native town.  At the early age of sixteen years she began teaching.  In 1853 she was married to R.H. Seymour, in Norfolk.  After the loss of her husband in 1864, she went to Hampton, VA., and became a teacher in the industrial department of General Armstrong’s school and afterward taught at Hilton Head, S.C. and Wilmington, N.C. Returning to New England, she was engaged as matron of a school kept in the old Jonathan Edwards house in Stockbridge, Mass., until she began the study of medicine at Saratoga, N.Y., under Dr. Hamilton.  In 1871 she entered the Woman’s College, medical department in New York City and graduated two years later.  She then went to New  Britain, Conn., began practice and in the summer of 1881 moved to Redlands.

At that early period the only building within the present boundaries of Redlands, south of the zanja, was a little house occupied by Orsen Van Leuven and which is now a part of William Ring’s residence on Olive Avenue.  This pioneer dwelling in Redlands proper originally stood on the south side of the zanja, just outside the present western city boundary.  On the evening of the day (May 15, 1877) when Mr. Van Leuven filed on his claim, the little house was placed on wheels and hauled over the rough and brush covered ground to its present location.  In May 1882, F.E. Brown completed and occupied the first plastered house in Redlands proper, now known  as the Day house on Cypress avenue.  Previous to this Mr. Brown and family had lived in Lugonia.  On November 26, 1882, Mrs. Seymour opened the Prospect House, the first hostelry in Redlands (see sketch of Simeon Cook).  She continued as proprietor for six years.  The only female help obtainable in those early days were squaws.  Mrs. Seymour relates:  “The very earliest trading, which led to the establishment of Cook’s store, was conducted by Brainerd Brown in a woodshed on Mr. Brown’s residence premises in Lugonia.   The small stock of goods was subsequently removed to the first dryer, erected by Judson & Brown.” As showing the interest taken by Mrs. Seymour in the beginnings of the city, it is noteworthy that she was one of the number who canvassed for funds to insure the building of the Terrace church, herself alone, secured $600 of the $1,600 raised by public subscription.  Mrs. Seymour was also one of the original directors of the Redlands Water Company.  After her arrival, in 1881, her skill as a physician was often called into service and she also soon became a favorite doctor with the Indians and occasionally, even now, a Redskin will hunt her up and ask for “medcin.”