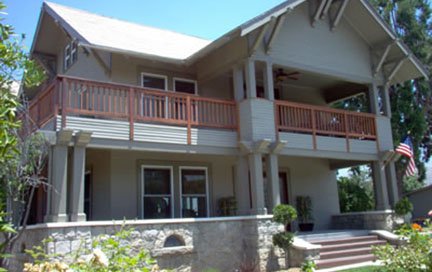 In December 1893, the Citrograph newspaper reported that a sister of Mrs. R. J. Phillippi had “purchased the S.W. Strong property, near Crafton Retreat, where Mr. and Mrs. John Lemberger will reside.” Thus Nina Lemberger, a single woman, first purchased the ten acres of orange groves on Crafton Avenue near the town of Redlands. There is some question regarding the year the existing home was built. However, a recent conversation with John Lemberger Jr., the great-grandson of the gentleman who built the house, revealed that the house had been built in 1905 for $5,500.

This lovely home is built in the Craftsman style. Gustav Stickley, in 1901, described Craftsman as “the ideals of honesty of materials, solidity of construction utility, adaptability to place and aesthetic effect,” according to the monthly magazine The Craftsman.

This particular example has a low-pitched front-gabled roof. The square porch roof supports, clustered in groups of three, are typically short (as in this home), but rest upon more massive piers made of cut stone.

The front gable has an unusual cluster of three knee-brackets, which are decorative or false braces, located at the peak as well as double brackets on each end of the front gable. All the roof rafters are exposed, which is typical in the Craftsman style.

The most impressive feature of this fine home is the cut stone foundation. The piers holding each pillar cluster are made of symmetrical square stones to distinguish them from the main foundation, which is of asymmetrical stones. It is obvious the footprint of this home remains in the original state by surveying the conforming foundation around the entire perimeter.

Members of the Lemberger family lived on the property for approximately 80 years. Ownership shifted to Joseph and Eleanor Bouye in 1974. The Bouye family owned the property for 20 years. The property was sold in 1995 to Leland and Evelyn Schwartz. In February 2000, John and Amy Moyles purchased the property.

The complete 10-acre parcel has passed from owner to owner over the years. The Moyleses have done a wonderful job restoring the house and it is once again a stunning example of a Craftsman bungalow.

The Redlands Area Historical Society congratulates the Moyleses for restoring the authenticity of this historic home.

Researched and written by Sandie Green.