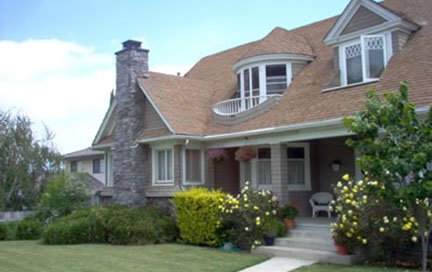 Architect-builder Robert C. Cunningham built this shingle style Victorian house in the early part of 1903 at 250 Terracina Boulevard. He purchased this property in 1899 but waited to erect the house while he built a house across the street. A prominent feature of the house is the use of shingle siding thus giving it a Victorian Shingle style.

The cross-gabled roof is in an “L” style with gables on three sides. Two dormers grace the roofline; one is gabled with double windows and the other a bay with diamond leaded glass windows and a small curved balcony with shingle siding. The bay dormer is part of a half-tower feature, which is prevalent in the Shingle style. On the first floor the half-tower becomes a bay with three double-hung sash windows with leaded glass. The recessed front porch is supported under the roofline. Adjacent to the front porch is a more prominent turret roofed tower. Dentils decorate the frieze under all the eaves across the front of this lovely home. Shingle style houses did not aim for decorative detailing but rather to show a complex shape enclosed within a smooth surface. It is a uniquely American adaptation of other traditions.

An early telephone directory lists R.C. Cunningham on Terracina south of West Olive on the Westside of the street in 1904. The house was sold in 1907 to A.T. Park because Cunningham typically only lived in the houses he built until he could find a buyer. The Citrograph published a picture of this house on page one, March 4, 1904, identifying it as “Residences on Terracina.” The house had several owners but from 1922-1938 it was listed on the tax records under David and Margaret McBain. Dr. L. Simmons updated the water connection in 1957, after he remodeled the inside of the house. From 1959 until 1981 Harold Fortress owned the house.

By 1997, Redlands Community Hospital was in need of expansion and the house was scheduled for demolition because it was situated just north of the hospital. However, the Historic & Scenic Preservation Commission voted to delay demolition in hopes that someone would move the house. Rob Walker stepped in to move the house, for approximately $30,000, to Bellevue Avenue. After the move extensive renovation was necessary. All the original cut-stone foundation and chimney were recreated so that today it still has one of the most common features of the Shingle style.

Shingle houses are relatively uncommon, except in coastal New England, so the Redlands Area Historical Society thanks Michael and Sandy Groseth for purchasing this historic home in 2000.

Researched and written by Janet Cosgrove