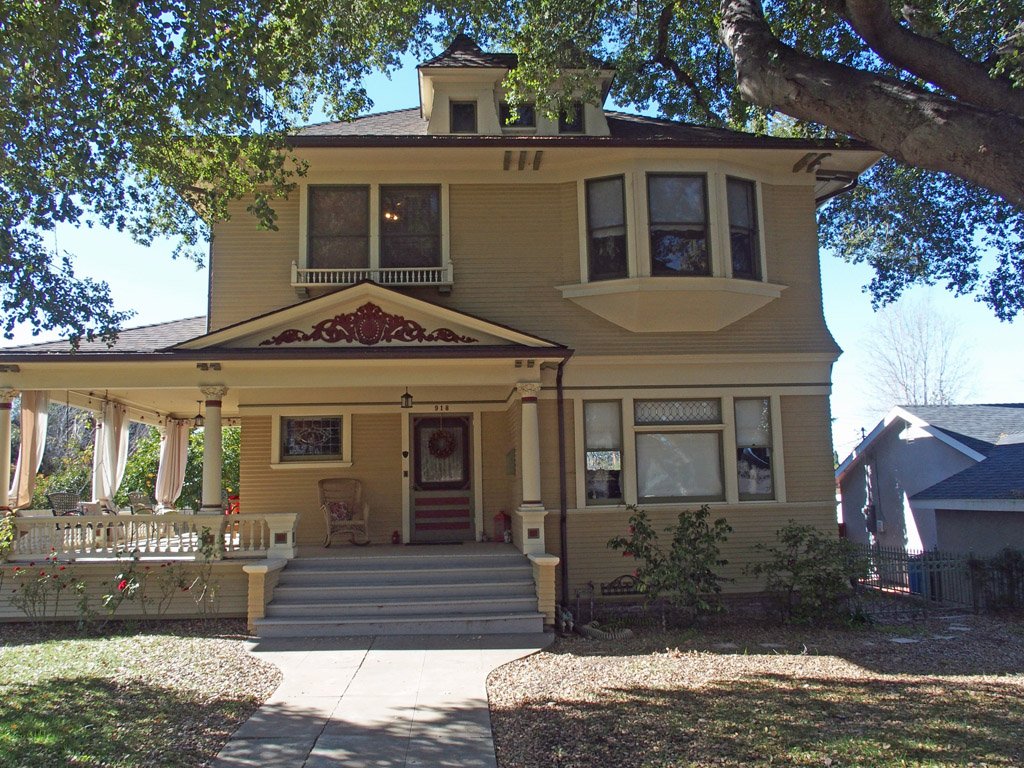 Lida H. Rogers, a widow, arrived in Redlands during the 1890’s. Her husband had been a much sought after grafter and budder. This occupation meant working with citrus trees in the sensitive area of converting citrus trees of different varieties to the more profitable Washington Navel bud variety.

The box style two story house was a popular turn of the century style in Redlands. Built in 1902 at a cost of $3100.00 by the firm of Lynn and Lewis who also drew the plans, the house has a bell cast hip roof covered with composition shingles. Dormers with the same bell cast hip roof dominate the roof. The siding on the house is narrow redwood clapboard with wide, flat board friezes at each story, flat board window surrounds, and a very wide, boxed roof overhang with notched brackets at the corners and along two sides.

The windows are mostly double hung but encompass many configurations, one of the most interesting being the cantilevered bay on the right front of the house on the second story which is directly over a lovely window group on the first story that has a large fixed pane, a leaded glass transom and narrow double hung windows on either side.

In the left front of the house is a recessed verandah-like porch which wraps around the side and is covered by a hip roof that matches the main roof. The front of the porch is topped by a large triangular pediment with a carved tympanum, and supported by five columns with Corinthian capitals and simple bases connected by turned balusters and rail. The front door has a large fixed glass pane with dental molding below.

The property was originally owned by Eliza Redhead, a widow. The house was built in 1902 and in 1904 Eliza deeded 2/3 of the land to Lida Rogers and 1/3 to her son, James F. Redhead. The house was owned until 1941 by John and Mary Kolyer. When Mary was widowed she moved and the house was rented for several years. The next owners, Charles Matthews, a college professor, and wife Eula, lived there until it was sold to John Hammer and his wife Mildred. John was roofer by trade and built a garage for $500.00. He added on to the rear of the house and also added a bathroom.

Steven and Priscilla Rice, the current owners, bought the house in 1978 and have updated the plumbing, wiring and replastered some of the walls. They demolished the old addition in the rear and a new one was added taking great care to match the existing architecture.

They have done a terrific job of restoring this home and we commend them for their efforts.