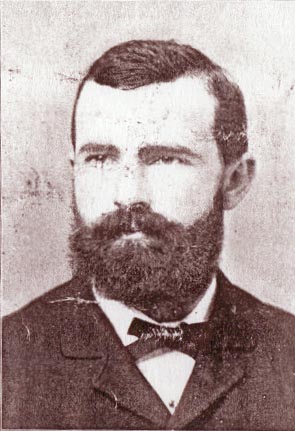 January 1,1889, the firm of M. & L.A. Canterbury, father and son, opened a drugstore in Redlands in the old Y.M.C.A. building on State street.  This was the second drug store established in the city, and was bought out by Dr. Stewart in the summer of 1891 and subsequently removed to Orange street.  Dr. Milton Canterbury was a native of Kentucky, in which state he was born January 24, 1821 and died in Redlands May 20, 1892.  His widow is still living here.  Lawrence A. Canterbury was born in Nelsonville, Mo., March 21, 1857.  With his parents in 1865 he crossed the plains in a wagon and located first in Corvallis and afterward in Dallas, Or.  In 1879 the family came to California and were residents of Yolo, Sonoma and Colusa counties before coming to San Bernardino county in 1880 and taking up homesteads of 160 acres each in San Timoteo canon.  The subject of this sketch received a good common-school education, to which he added by extensive reading and studies at home, conducted in leisure hours.

While in Northern California he was engineer in a mill and soon after coming to this county was employed by M. Byrne, general merchant of San Bernardino city, as bookkeeper and confidential clerk.  He remained in this position until he opened, in partnership with his father, the drug store above mentioned, the latter conducting the business, the former furnishing the capital necessary and occupying his time with the improvements of his homestead.  January 15, 1885, he was married at “Crafton Retreat” to Miss Rosa Belle Robbins, a daughter of Mrs. E.P.R. Craft.  A sketch of Mrs. Canterbury’s life is on another page.  In 1890 he purchased the property and built the residence where the family then removed and where his widow now resides with her four children, Harry H., Charles M., Ellison R. and Laura A.  On September 11, 1890, while in bathing at Long Beach he was seized with cramps and drowned.  Several days afterward the body was recovered and now lies buried in Hillside cemetery.  He was an earnest prohibitionist, a zealous Christian, a kind husband and father, esteemed by neighbors and acquaintances.