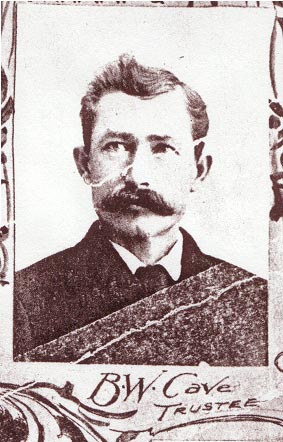 A native Californian, B. W. Cave has lived nearly all of his life in San Bernardino County.  In 1868 his father purchased a part of what was then known as the Carpenter ranch, and is now a part of Crafton.  Since that time, with the exception of about three years spent upon the desert, in mining, Mr. Cave has lived in the vicinity of Redlands.  Most of his business experience has been in horticulture, except for about five years, during the boom, during which time he was a partner of J. C. Reeves in the livery business, at first on East State street, succeeding C. L. Hayes, and afterward on Orange street.  The site of this business was replaced in 1895 by a substantial brick block, known as the Cave and Reeves building.  Mr. Cave was a member of the first board of trustees elected in Redlands, November 26, 1888.  At present he is engaged in looking after property interests in Redlands and vicinity, and in attending to his duties as a member of the board of horticultural commissioners for San Bernardino County, a responsible office, which demands a great deal of attention.