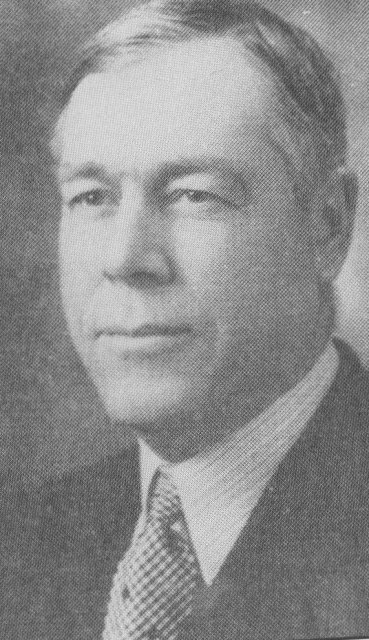 HIGHLIGHTS galore punctuate the diversified career of Will L. Fowler, county supervisor for the Redlands district. He has been mayor, councilman, city marshal, foreman and manager of packing houses, builder, soldier, surveyor – even Y.M.C.A. janitor in the days when he was financing his education at the University of California. Although a pioneer resident of Redlands, his native town is Newport, Minn., nestling at the edge of the Mississippi river, 10 miles south of St. Paul. He was born March 16, 1875.

Typically a country school was the one room structure in which he started his education. Later he attended St. Paul’s college, a German Methodist institution that would be ranked today as no more than an academy.

His father, William Fowler, sold the Minnesota farm and moved to Redlands in 1890, thanks to the influence of John P. Fisk, who arranged for the purchase of 10 acres on West Cypress Avenue. Will studied four years in Redlands high school, then situated in the second story of the Wilson’ Berry block on the Casa Loma hotel site, finishing in 1895 with the institution’s second gradu­ating class, which had only 13 members.

He worked for one year as janitor in the Y.M.C.A. (the present city hall) and enrolled at the University of California. Out­break of the Spanish American war stopped his college career. Eager to enlist in Red­lands’ own military contingent, Company G, Fowler met the group on its arrival at San Francisco, but the ranks were full. Disap­pointed, he came home by boat. President McKinley’s call for additional troops gave Fowler his opportunity, but even then he succeeded only in the nick of time.

“The company was to accept 40 more men,” Mr. Fowler remembers. “I arrived back in Redlands on a Saturday night, en­listed on Sunday and stood in line Monday morning for physical examination. The man ahead of me was rejected. I was the fortieth man accepted – no more could qualify.

The second Redlands contingent entrained in June, 1898, but Company G never reached a battlefield. In November the company came home on three weeks leave, then was summoned to Los Angeles and mustered out of service at Exposition Park.

Fowler entered the employ of Isaac Ford, helping to survey for apple orchards in the Oak glen area. He also helped chart a course for the South Mountain Water Co. pipe line, which brought Oakglen water to the Redlands heights district at a critical period when water was costing irrigators $5 per inch.

Redlands Fruit association wanted a foreman. Fowler took that job. He remained at the same packing house in the succeeding season, although Malone & Smith had ac­quired the plant.

He engaged in carpentry until 1906, when he was elected city marshal and ex-officio tax collector. In those days the police depart­ment consisted of two men on night duty and an equal number working days. From 6 to 10 a. m., Fowler was alone. But he kept the post two years and returned to building. His last construction was the remodeling of the Sixth street packing house (present O’Bryan & Johnson plant) for Redlands Heights Or­chards, organized as a Mutual Orange Dis­tributors affiliate. Fowler accepted managership of the house and had shipped only 12 cars of fruit when the disastrous 1913 freeze ruined the citrus crop. He held the position 10 years, after which the association dis­banded, equipment being sold to Elephant Orchards.

As would be expected Mr. Fowler has been vitally interested in the citrus industry and has cared for and owned various orchards. In early 1900 he purchased his first four and one-half acres. Since that time he has operat­ed various groves devoting the longest period to his present home site at 1322 West Cypress Avenue.

Fowler was elected city councilman in 1918, emulating his father, who had been councilman and mayor for eight years. The son left public service in 1922, but was re-elected to the council in 1926, 1930 and 1934. Eclipsing all previous records, he served on the council for a total of 14 years and was mayor from 1932 to 1936. He retired in the winter of 1936 to take the county supervisor’s office, which he still holds.

Years of prominence in the First Baptist church are to his credit. He has been treasurer for 30 years. Three years ago he was president of the Southern California Baptist convention, of which he has been a director for eight years.

He is a newly reelected Chamber of Com­merce director, a distinction that he has held for several years, and is secretary of the Redlands Water Co. He is a member of the Ma­sonic lodge, Rotary club, and the United Spanish War Veterans.

He was married in Redlands Nov. 25, 1902, to Elizabeth E. Shorey, his sweetheart of high school days.