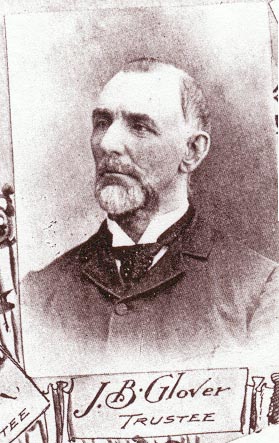 The name at the head of this sketch is that one of the oldest continuous residents of Redlands, a man who came to Lugonia, which is now a part of this city, March 10, 1870, and has witnessed every phase of transformation from a wide waste of sun-burnt prairie to a progressive city, with an almost continuous orchard radiating for miles from its center in every direction.  Born in Benton county, Mo., June 29, 1842, James Brown Glover came to California with his parents in November 1855.  The family went to Drytown, Amador Co., a place that was famous during the gold excitement.  Here Mr. Glover grew to manhood, assisting his father in quartz and placer mining, attending school, learning the blacksmith’s trade and farming.  July 2d, 1863, he married Miss Elizabeth A. McGuire.  They have three living children, Mrs. W. T. Lawry, of Santa Rosa, Mrs. F. A. Armstrong, of Moreno, and Ed. M. Glover of this city.

Soon after his marriage Mr. Glover engaged in mining in Owen’s Valley, and in the fall of 1865 he abandoned that occupation to become a farmer in Mendocino county.  He remained there until he came to Redlands as above noted.  The claim that he took up here is about two miles north of the post office, but within the city limits.  His residence was erected on what is now the John W. Gore place.  In February, 1873, having completed his preemption, he engaged in ranching and fruit growing in Crafton and Highland until the fall of 1876, when he returned to his original claim and began improvements thereon.  October 1, 1887, after clerking for B. O. Johnson for two months, he bought a new stock of groceries and opened store in the Berry & Wilson building, which was subsequently torn down to make way for the Casa Loma hotel.  A year later he moved his stock to the southwest corner of Orange and Water streets, and for a long time did a large and successful business.

For 24 years Mr. Glover has been a steward of the Southern Methodist church.  He was a member of the Board of Water Commissioners for San Bernardino county for seven years and one of the Board of Trustees of Redlands from the incorporation of the city, November, 1888, until April 1, 1896, and president of the Board the last two years.  At the general election last fall he was elected Supervisor to represent the third district of the county, and his associates upon the Board of Supervisors have honored him with the position of chairman.