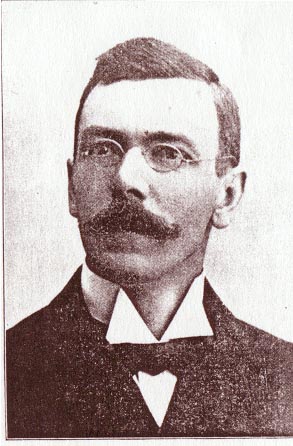 Rev. W. F. Harper, pastor of the Baptist Church since December 15, 1893, is a son of Henry C. Harper, a well-known educator of Indiana, in which state he was born, March 9, 1854.  He was educated largely by his father, and also at the high school at Danville, Ind., and in the University of Lebanon, Ohio.  After graduation, Mr. Harper was an instructor in the normal department of his Alma Mater, and in 1876 was elected principal of the Central Indiana Normal School, and, three years later, organized the Southern Indiana Normal school, at Mitchell, resigning the principalship of this school to enter the ministry in 1882.  During these years he was a lecturer on educational topics throughout the state, and a special student of mental science, pedagogy, law and theology.

In May, 1882, Mr. Harper was ordained as pastor of the First Baptist church, at Wichita, Kan.  Six years later he became pastor the First Baptist church at San Diego, where he remained three years.  His next pastorate was at Tacoma, Wash.  This pastorate was cut short by the serious illness of his oldest daughter, who died in Redlands in May, 1895.  While at San Diego, eight chapels were erected by the missionary society for the smaller communities of San Diego county.   The little church, used by the society in Redlands since 1889, not being sufficiently large to comfortably seat the increasing congregation, services were opened in the YMCA auditorium on March 4, 1894, and were continued there until a new and commodious church edifice was built and formally opened, December 27,1896.  The membership has grown rapidly and now numbers 220.  A new parsonage has also been built since Mr. Harper came here.  Mr. Harper was married at Aimo, Ind., to Miss Margaret Tincher, and three of their four children are now living.  He has been elected president of the Baptist State Convention in each of the three states where he has been a pastor.

The Baptist church was organized Nov. 13, 1887.  The first meeting was held in the Lugonia schoolhouse, and was presided over by Rev. C. W. Gregory of Los Angeles.  Services were continued in the school house until the following June, when Rev. Daniel Read became pastor, and immediately thereafter a tent was erected on a lot on Cajon street, where a church was afterward built and dedicated Feb. 24, 1889.  After a pastorate of five months, Rev. Read was called to Los Angeles, and was succeeded by Rev. W.W. Willis in February, l889, who remained with the society until the following May.  Rev. J.D. Rumsey succeeded as pastor in September, 1890, and continued to supply the pulpit until the summer of 1893.