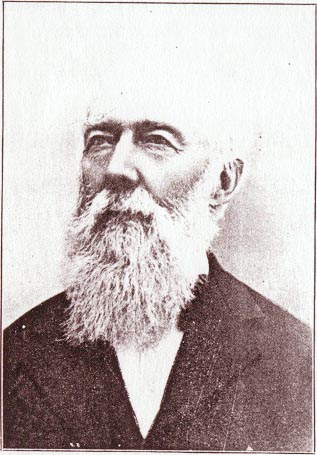 Among the California pioneers now residing in Redlands, is Issac Newton Hoag, an Argonant of 1849.  Born March 3, 1822, at Macedon, Wayne County, N. Y., and reared upon a farm, he received his early education at district schools and at the Macedon Academy.  At intervals of his own education he taught school and read law.  In due time he was graduated from the academy, and January 1, 1849, was admitted to the bar.  The same day he decided to come to California, and made the trip by way of the Isthmus, being 99 days upon that part of the journey from Panama to San Francisco.  For 30 days of this period the vessel was becalmed, and the passengers were put upon a diet of one cracker and a pint of water each, per diem.  July 4, 1949, Mr. Hoag dug his first gold from Horse Shoe Bar, on the American river.

After some success in the mines, Mr. Hoag went to Sacramento and engaged in mercantile business.  In 1850 he owned a ferry across the Sacramento into Yolo county, which, for a time, was very profitable, the receipts for three months in the fall of 1850 being $27,000, but later it was replaced by a bridge.  About this time Mr. Hoag was admitted to the bar in California.  In January, 1853, Mr. Hoag was married at San Francisco to Georgie J. Jennings, a native of Philadelphia.  After going out of the ferry business he was for a time in partnership with his brother, B. H. Hoag, importing agricultural implements from the East.  In 1861 Mr. Hoag was elected a member of the California legislature by a coalition of the Republicans and the Douglas Democrats of Yolo County.  Later he was appointed County Judge by Governor Stanford, to fill a vacancy, and was afterward elected for another term.  In the spring of 1862 he was elected secretary of the State Agricultural Society, which office he held for ten years.  He drew and secured the passage of a law making this society a state institution, with a directorate appointed and commissioned by the governor.  In 1870 the Pacific Rural Press was established and Mr. Hoag became its leading agricultural writer for four years.  At the same time, and after resigning from the Rural Press, he did similar work for the Sacramento Record-Union, and was, for two years, a writer for the Bulletin along the same lines.

In 1881 Mr. Hoag was elected secretary and actuary of the State Anti-debris Association.  In May, 1883, he was appointed commissioner of immigration for the Southern and Central Pacific Railroads, and spent three years in Chicago, encouraging immigration to California.  Having become interested in this portion of Southern California, he decided to come here to live, and arrived in Redlands in 1886.

In this city Mr. Hoag has been active in many enterprises for the development of local interests.  He assisted in securing the Chicago colony, and at one time had an interest in 1,600 acres of land belonging to the Crafts estate.  He sold $70,000 worth of this in one year, and through efforts to secure the irrigation of this tract, assisted largely in the early improvement of Crafton.  Mr. Hoag was one of the organizers of the Domestic Water Company, and a director, until three years ago.  He now owns twenty-five acres of bearing orchards on Lugonia Heights.  During the recent agitation for a protective tariff on citrus fruits, Mr. Hoag made a close study of the subject, and is entitled to the credit of the happy thought of levying a tariff by the pound instead of by the cubic foot, as heretofore.  This change which, after much argument, was finally adopted, was the key to the final solution of a knotty and important problem.