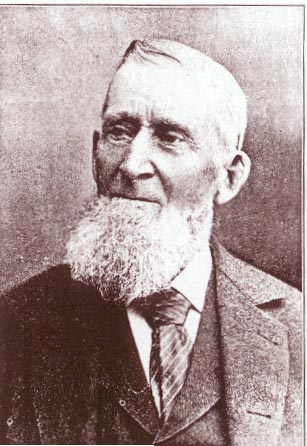 Born in Litchfield County, Conn., in 1826, Samuel J. Hayes commenced his journey to the Pacific Coast at the age of seven by traveling in a two-horse wagon to Illinois.  There were then no railroads in that country and only 26 voters in Chicago.  Near Ottawa, in La Salle County, Mr. Hayes lived for 51 years.  His father bought a claim of about 160 acres, the nearest neighbors being five miles distant on one side and four miles on the other.  When Mr. Hayes was 11 years of age his father died and five years later his mother died also, leaving him with the care of three brothers and a sister, all younger than himself, whom he cared for until his sister married in 1847.  By saving a little money and borrowing more, at first at 2 percent a month afterwards at 20 percent and 15 percent a year, Mr. Hayes finally acquired a farm of 410 acres, and through its growth in value and other earnings, estimated, at the end of 12 years that he had cleared $8 a day.

On coming to Redlands in 1882 on a visit, Mr. Hayes was so well pleased with the place that he bought the five acres where he now resides.  In the fall of 1883 he returned with a car and brought the doors, windows, blinds, casings and stair railings for his house, also a carpenter to do the work.  On this trip he was in Redlands ten weeks, helped to enclose the house, bought more land and then returned to Illinois, leaving the carpenter to finish the building.  In the fall of the following year, 1884, Mr. Hayes moved to Redlands with his family.  He planted his lands to orange groves and was largely interested in many enterprises which assisted in the early growth and prosperity of the city.  He was one of the organizers of the Union Bank and was elected a director and the vice-president, which offices he has held to the present time.  He completed the building of the Terrace Villa hotel, which was commenced by D. L. Clark, at a cost of $27,400.  He was one of the earliest and heaviest stockholders in the Windsor hotel, and at one time owned the Terracina.  When the Santa Fe built into Redlands, Mr. Hayes subscribed $1,500 towards the right of way.  He has been a director of the Domestic Water Company.  Mr. Hayes is a member of the Congregational church.  He was chosen a director of the Redlands Y. M.C.A. and made a generous contribution towards the fund for the building.  Married in 1854 to Sophia W. Cummings, a native of Massachusetts, Mr. Hayes has three children: Emma J., wife of Dr. Lewis, now living in Illinois; Gertrude, living at home and Chauncey L. Hayes of Redlands.