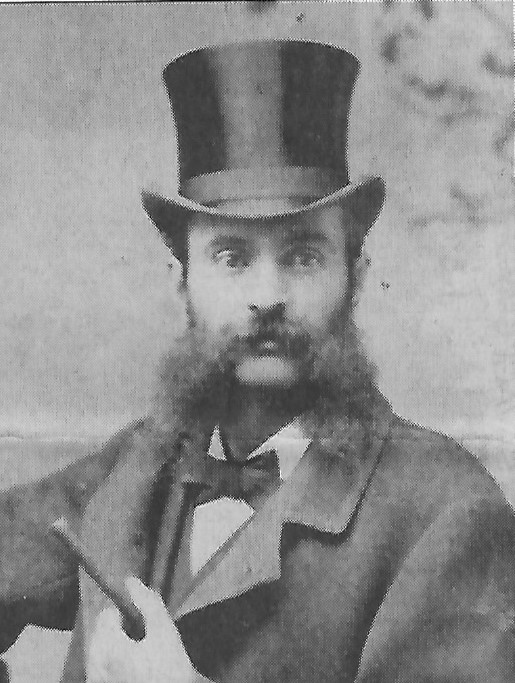 Edward Newell James is responsible for many early photographs of Redlands, of the visits by presidents William McKinley and Theodore “Teddy” Roosevelt, of orange groves, A.K. Smiley Public Library and more. James was the second son of Benaiah M. (1824-1910) and Mary Dearborn Haines James (1827-1922), Redlands pioneers. He began his career as an itinerant photographer. Born June 20, 1850, in Manchester, NH, Edward did not come West with his parents in 1890, having already gone into the photography business in 1872 at the age of 22 in Northfield, MN.

Not long after beginning his photography business, he moved to Illinois where he lived for seven years, working in Bureau, Whiteside, Star and Henry counties. He had studios in Wyoming and Tampico, IL. On April 26, 1876, he married Mary A. Sawyer, formerly of Medford, MN. The exchanged their vows in Elmwood, Ill. In 1877 the young couple had a daughter, but on Sept. 2, 1878, Mary died of pneumonia. Following Mary’s death, Edward took his daughter to his parents, who were in Northfield at the time, and returned to Illinois to continue his photography business. A few years later, he opened a studio in Northfield and worked out of his parents’ home. On Oct. 1889, he married for the second time, to Lucy A. Hutchinson, a Northfield school teacher. The couple had two children, Warren Benaiah James on Aug. 22, 1890 and Ralph Patterson James, Jan. 27, 1892.

After his marriage, Edward James continued his photography career, working small towns in south central Minnesota. In Mankato, MN he met Elias Everitt. Both Everitt of Mankato and I.E. Sumner of Northfield eventually moved to Redlands and opened photography studies. When Benaiah and Mary became residents of Redlands, they began urging their children to join them. They particularly wanted Edward to come west because he was suffering from tuberculosis. Redlands was considered to have a healthy climate.

Before his move to the west, Edward traveled through historic sites in Virginia, North Caorolina, Georgia and other Southern states. Finally in January of 1898, Edward took a train, via Kansas City, Mo., Albuquerque, N.M., and Ashfork, Ariz., to Southern California. The train ticket for the trip was $45. Edward came to California to “try” the climate, leaving his wife and children behind. Initially, he lied with his parents on the orange ranch on the southwest corner of Park Avenue and Alabama Street in the Barton Tract. He did not pursue photography at first, instead serving as a day worker in surrounding orange groves for the Gregory, Toby, Sargent, Melville, Barker familieis and Willard Nichols.

Nichols plays a significant role in the James family history. He met Benaiah when both were renting rooms with Dr. Ben Barton. When the Edward James’ family came to Redlands, in June 1899 they were invited to move into the Nichols home where, in exchange for their care of him, they received their housing. Lucy James cooked, cleaned and did the laundry for Nichols while Edward looked after the groves and handled maintenance chores. Nichols, a retired civil engineer from the Northeast, had a vast library and many interests. According to Ardith James, “His kindness and scholarly pursuits had a profound influence on the James family. Edward and Lucy’s son, Warren, ultimately became a civil engineer because of Nichols’ encouragement.

In addition to help Nicholas, Edward continued his photography, working for Elias Everitt as a freelance photographer and from time to time, substituting in the gallery when Everitt was out of town, according to information Ardith James located in Edward’s diaries. For the next 10 years, in spite of continuing health problems with tuberculosis, Edward pursued his photography business. He captured the early Smiley Heights, the Redlands Bowl and panoramas of the valley that have been published many times in books and newspapers. According to Ardith James, many of Edward James’ pictures were published under Elias Everitt’s name. Several of Edward’s photos of Redlands, Northfield and the southern states are in the Library of Congress.

One special photo of a peak in the San Bernardino Mountain range, taken from the Lewis Cram family home in Highland, was presented to McKinley shortly before the president died. It is on display in the recreated McKinley office at the Smithsonian Museum.