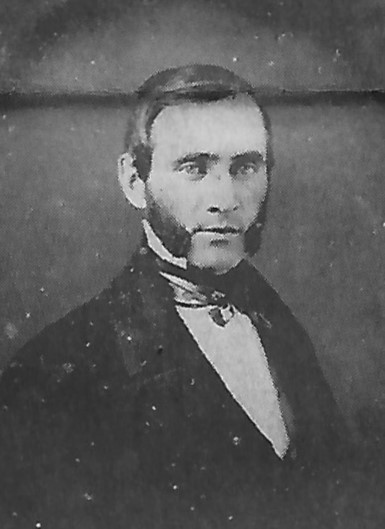 Benaiah and Mary James, originally from New Hampshire, lived in Minnesota before settling in Redlands in 1890. “My dear wife and family: Youi will see by this that I am at the famous orange groves of California, one of the prettiest places that I ever expected to see,” Benaiah Marston James wrote to his wife, Mary Dearborn Haines James, on April 15, 1890.

James had just come to California, the San Bernardino-Riverside area, from Minnesota. He was much taken by the different character of Southern California. He continued, “I went into a washroom, (and) right within reach of the window there is a lemon tree with at least 150 nice lemons as you ever saw, and as we road into this town on the motor (car) each side of the car was orange orchards hanging as full as they could be, perfectly ripe. They were as thick as you ever saw…, the most beautiful sight I ever saw and beyond description.” Although he faced some initial difficulties in finding a place to live and work to sustain him, James fell in love with Southern California – particularly Redlands – and stayed, later bringing his wife to join him.

In May, he wrote his children that we would be homesick for them “if not for the sight of the wonderful things one sees here all the time.” He was searching for work and wanting to perhaps grow oranges, but “the land that is fit for that is so high, from $280 to $300 per acre.” He first stayed on the Barton Ranch and noted Dr. Ben Barton was selling land quickly. He mentioned a “Mr. Nichols” who bought 20 acres and was building a home. Nichols later figured in the James family’s life. He also mentioned that the “Smiley brothers have bought a large tract of broken hillside and already expended over $50,000 in improving the land. They have the prettiest view I think that one scarcely sees in this or any other country.”

Benaiah James was a native of New Hampshire who moved to Manchester, N.H., when he was a teenager when manufacturing jobs were available there. He married Mary Dearborn Haines and began their family in that city, later moving to Wisconsin in 1854 and to Minnesota in 1955. After seven years in Minnesota, they moved to St. Anthony (now part of Minneapolis) for the children to attend school. In 1866 they settled in Northfield, Minn., where Benaiah farmed, operated his own cheese factory and worked as a foreman at Ames Mills. While there he was elected to the Minnesota Legislature for two terms. In 1874 and again in 1889.

When he moved to Redlands, his children were grown. The couple had four children. Willis, the eldest, stayed in Minnesota, eventually becoming a county treasurer. Edward Newell James was a photographer eventually settling in Redlands. Alice James lived in Grand Rapids, Mich., and became the state’s first female high school principal in the late 1800’s. Grace came to Redlands in the late 1890’s to remain. When she retired, Alice came to Redlands and lived with Grace. In a letter to his wife, before she joined him, Benaiah James wrote that if he had 2.5 acres, he and his wife could live on it, only having to buy bread and groceries. Benaiah said the town was six miles square and that “they do no think much of distance (here), whereas in Minnesota, they would think six or eight blocks is a good ways to go.”

He first went to work planting and irrigating orange groves. “The nursery business for orange stock is just immense,” he wrote. “They are raising them by tens of thousands and I think it’s safe to say millions.” One of the men whom James helped with the setting out orange groves was W. A. Nichols, who at the time was also boarding at the Barton Ranch along with several others. The two men set out 1,000 trees in four days, James wrote. “It is dusty here and such dust you never saw! It sticks to everything. They have men with feather dusters standing on the steps of churches to dust your shoes before going in to church.”

In July of 1890, after Mary James arrived, she took up the job of correspondence writing to her daughters in the east about the beauty and the heat of the area. “I wish you could see a tree there in the front yard called a Crepe Myrtle. It is 14 feet high and is a large over the top as one of our trees that stood next to the walk at home, and just covered with red blossoms like the shape of a lilac. Tuesday is was 106 in the shade, yesterday 104, today 96. A fine time to sweat out a cold.” Finally, on Dec. 15, 1899, the couple purchased land – 10 acres on the southwest corner of Park Avenue and Alabama Street – from Herman O’Kelley. The initial payment was $1,540 with an apparent balance of $1,600 due. Benaiah reportedly went right to work to build their home, possibly one of the many so-called “shanties” in the Barton Tract.

In about November 1891, Mary wrote her daughters that, “If you could only have California climate, you would have no use for California itself.” She felt Minnesota was “more settled” and more “uniform. She was also apparently disenchanted with some of the people she had met., characterizing them as “pretty much a grab fame here, such swindling, deceiving, lying, each one to beat the other in business circles is appalling.” By 1893 she was settled in, her opinion had changed and she began urging her children to move to Redlands.

[Source: Monk, Bobbe, ‘From Minnesota to a Life in Redlands,” The Redlands Daily Facts, page C1 from the James family history by Ardith and Henry “Jim” James.] 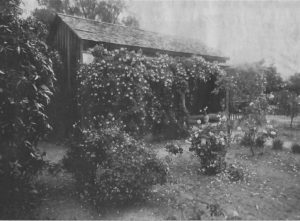