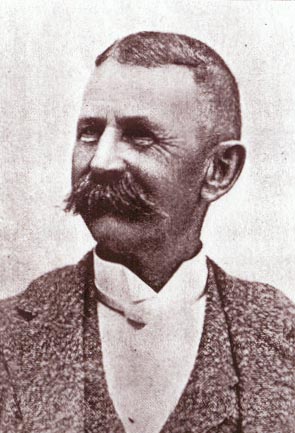 Robert W. Mateer, proprietor of the Redlands Fish Market, was born at Carlisle, Pa., May 6, 1845.  He lived in Pennsylvania until 16 years of age, when he entered the Union Army as a trooper in the Ninth Pennsylvania Cavalry.  Enlisting in May, 1862, he served until discharged, December 31, 1864, for disability resulting from a gunshot wound received at the battle of Dandridge, Tenn., several months before.  During this term of service, Mr. Mateer participated in thirty-one engagements, besides skirmishes.  After his discharge from the Army Mr. Mateer returned to Pennsylvania and went to school, taking a course of study at an academy.  After this he went to Minnesota, and from there, three years later, to Wyoming, Dakota and Montana.  In 1869 he arrived in Sacramento, and has resided in California ever since, except a year and a half spent in the Sandwich Islands growing sugar cane.  His business experience in California was divided between ranching and mining.

In December, 1891, Mr. Mateer came to Redlands, and opened his present business in the fall of 1894.  In 1891 he was married at San Bernardino to Mrs. Clara Wolverton, a native of Illinois.  Mr. Mateer is a prominent member of the Redlands Post, G. A. R., and is a member of other local societies.

Mr. Mateer is the first and only man to make a success of the fish and produce business in Redlands, a branch of trade which had been neglected in this city until he made it “go.”  He opened a market near his present location, on Water street, with a partner, under the firm name of Stevenson & Mateer, but bought his partner’s interest after a year, and has since conducted the business alone.  In changing to his present location he had his place of business especially fitted up with many conveniences, and has since supplied a growing trade with the freshest and best of everything in his line, such as fish, oysters, poultry, game, salt fish, eggs, and dairy produce.