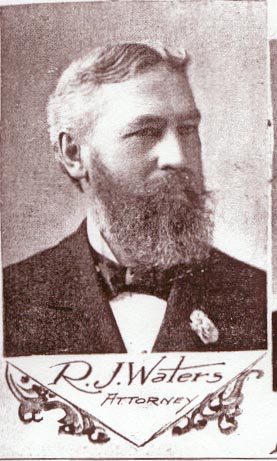 Among the most active of the founders of Redlands was R. J. Waters, formerly of Chicago, now of Los Angeles.  Mr. Waters was born in Halifax, Vt., June 6, 1843, and spent his early life in Massachusetts.  He was graduated form Franklin Institute, where he was afterwards professor of Latin and Mathematics.  Later he went to Chicago and studied law with Messrs. Rich & Waterman.  He was admitted to the bar and practiced law more than 20 years.  He was married to Miss Mary Adelaide Ballard, daughter of Colonel Jonathan Ballard, of Charlemont, Mass.  They have four children, Arthur Jay Waters, now cashier of the Citizens’ Bank, of Los Angeles, Mabel Maud Waters, Florence Lillian Waters, and Myrtle Adelaide Waters.

In 1886 Mr. Waters came to Redlands in the interest of the Chicago California Colony, of which he was president.  Mr. Waters was chairman of a committee of three, whose business was to find a suitable location for this colony, and, the following year, Redlands was chosen.  Afterward Mr. Waters bought fifteen acres of land on the zanja, and located the town of Redlands.  The town plat was filed March 10, 1887.  In the few years immediately following Mr. Waters was actively engaged in many enterprises for the advancement of Redlands and vicinity.  He was the first president of the Redlands News Company, under which title as owner the Citrograph is still published; was the projector and the first president of the Redlands Street Railroad Company; the first secretary of the Redlands Hotel Company, which built the Windsor Hotel; was the general manager of the Bear Valley Irrigation Company for one year, and was a director, at different times, in numerous companies, among which were the Union Bank of Redlands, the First National Bank of Redlands, the Crafton, Redlands Heights and East Redlands Water Companies and the Redlands Orange Grove and Water Company.  Mr. Waters was on a committee, with E. G. Judson, to secure the right of way for the Southern California Railroad Company from San Bernardino to Redlands and Mentone, and to raise funds to pay for it.  He took eleven trips from Redlands to New England to raise funds for different Redlands enterprises, during the first five years of his residence here.  He was the first city attorney of Redlands, but resigned a few months after his appointment, and was succeeded by C. C. Bennett, who had been acting city attorney.  In these  ways, and in others of minor importance Mr. Waters was connected with nearly every business project of public interest brought forward during his residence in this city.