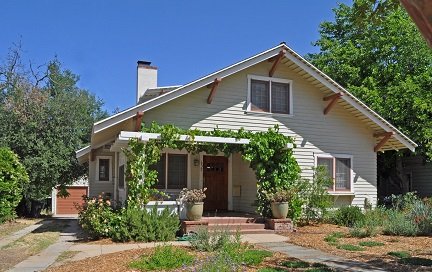 This lot was purchased from Thomas McCabe in 1909. It was the last remaining lot on the north side of Block 26 of the Residence Plat. Most of the other homes on this block were built in the late 1800s.

Mrs. A. W. Smith (Statia) contracted with Davis Donald to build her a house in 1910. The estimated cost was $2,100 dollars. Mrs. Smith lived in the house for approximately 20 years. The house is one-and-a-half stories tall, in the low-slung manner typical of the Craftsman style. The front porch is partial width, also typical of the Craftsman’s style, and has a lovely shade structure. The pergola is comprised of horizontal beams, which demonstrates the Japanese influence on California bungalows. The original front door, which has eight small beveled glass windows, is a prominent feature. The foundation is brick with a substantial column supporting the pergola structure. The overall architectural design of the house includes simple, horizontal lines, with rectangular shapes repeated throughout.

The roof is gabled and sloping with overhanging eaves accented with brackets. There are two dormers, one on the west side and one on the east side of the house. The house has wonderful original grouped French windows throughout the downstairs and upstairs with curved and flared side casings. The current homeowners painted the house in several colors to accentuate these details.

Sometime in the 1930’s a one car detached garage was added to the property. It was later extended to a two car plus in 1946.

The house has had seven owners after Mrs. Smith. The David Cochrane family lived there the longest, from about 1960 until 1998. Mr. Cochrane was a fireman. The house was purchased by Sean Nealon and Lauren McSherry in August 2010. The property was in foreclosure and had been sadly neglected. They saw the potential and began “phase one” right away. This included completely tearing off the roof and installing a new one, replacing missing portions of the foundation and painting the exterior. Recently they have completed the front landscaping, as Sean is a master gardener. He had already completed most of the back area. There were many interior projects going on as well.

The Redlands Area Historical Society congratulates Sean and Lauren for caring enough to restore this historic Redlands home. With grateful appreciation we acknowledge all of the hard work they have personally contributed to maintaining this lovely home.