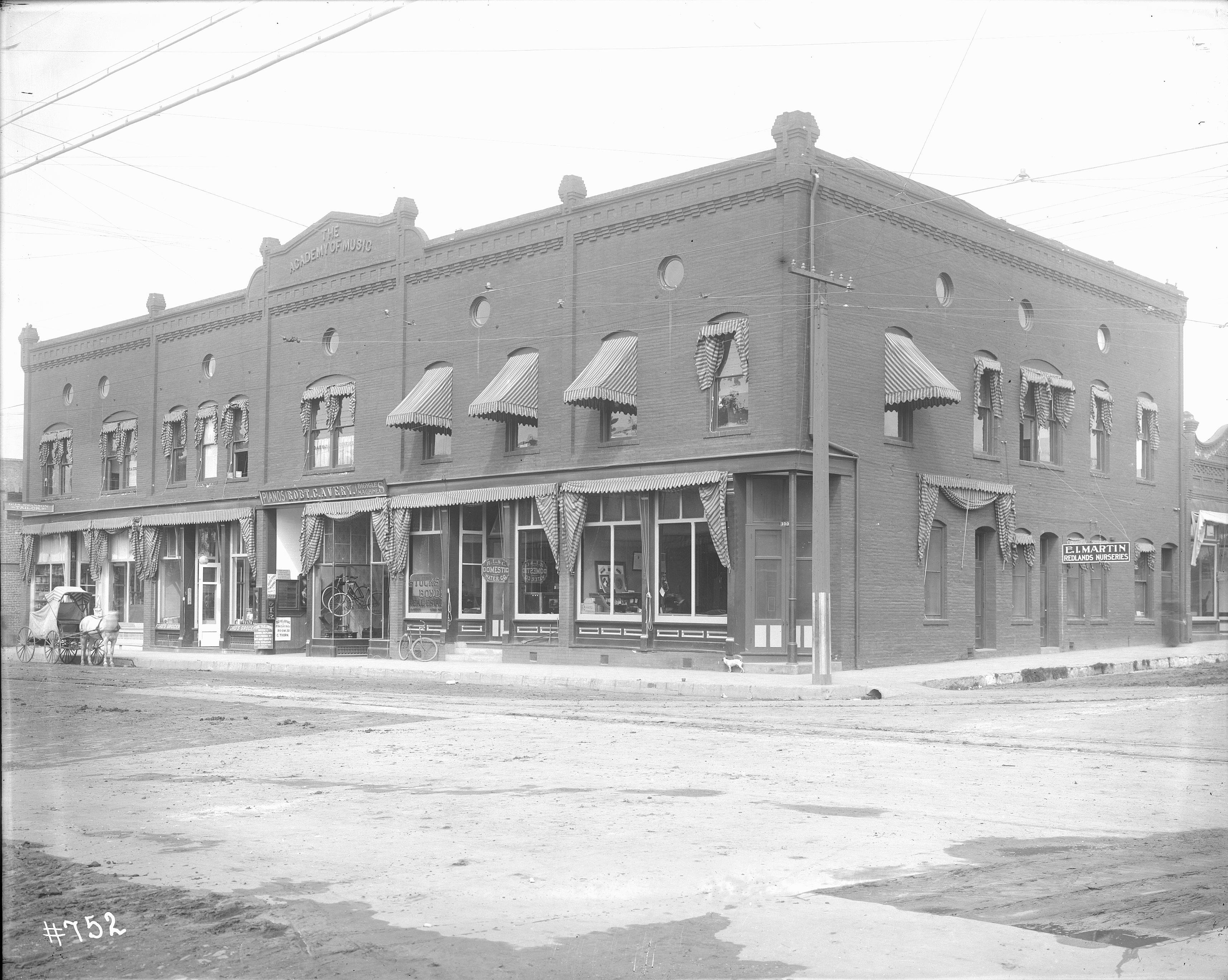 George W. Meade, a wealthy capitalist from San Francisco and a friend of Frank Brown, was responsible for building the Meade Opera House. The building was designed by the architect, Newcomer, and the firm of Lynn and Lewis began construction in I890 and completed the building in April of the following year. According to the Citrograph, “Redlands needed a first class opera house and City Hall for the growing metropolis.” Meade owned much of the present “Prospect Hill” property and was looking for an investment in Redlands. An imposing structure, the 118 feet front by 60 feet depth promised the latest in comfort at the reasonable cost of $17,000. Meade, incidentally, built a similar building across the street in the present mall parking lot. Completed by March of 1891, some Redlanders complained about the plainness of the building expecting more for the price. To avoid being called the “Opera House” or “Meade’s Opera House”, Scipio Craig of the Citrograph suggested the name of “Academy of Music” to give “life to the building and raise its brow from obscurity”.

The 500 seat theater upstairs could accommodate theatrical interests of Redlands. George W. Meade, pioneer of the raisin and dried fruit industry in California, was taken by the new name suggestion and a sign was placed atop the structure labeled “Academy of Music”. Besides the Opera House, the Bear Valley Irrigation Company offices, which directed the irrigation line from big Bear lake to the Moreno valley, found a home in the building. In May of 1891, Bear Valley Company purchased the entire building, which at the time housed the Domestic Water Co. W.T. Prine Real Estate, Charles Greene, President of the Bear Valley Company, and the City offices of Redlands.

This building figured substantially in the cultural life of early Redlands, with its upper floor devoted to an auditorium, known for years as the Academy of Music. Public entertainment’s were staged there, and above the present ceilings there are still posters plastered on the higher walls, boosting shows that came to town and the stars who performed there. The widely known Redlands Band played there on winter nights. Public schools and various organizations considered the Academy of Music their principal showplace. An article from the Citrograph, dated March 14, 1891 reads:

“As the decoration of the Academy of Music progresses a good idea may be obtained of the handsome appearance of the hall when it shall have been completed. The ceiling is decorated around the outside with a double row of panels of an olive shade, and between these is a turquoise blue star panel bordered with handsome embossed decorations. The center panel is a beautiful cobweb pattern in gold and copper on a buff groundwork, surrounded by an 18-inch decoration in blue, gold and olive. At each side and end is a handsome six-foot diamond panel, with gold figures on a buff ground. The walls are covered with a fine terra cotta and gold embossed paper with dado and chair rails in gold, and an 18-inch embossed border. The balcony ceiling is a cob web pattern of gold on a blue ground. The room is 60 x 75 feet and there are nine panels in the ceiling. The effect Mr. Jackson has created in these decorations makes the hall a thing of beauty.”

The Academy of Music was known as the Hubbard Building for decades, and became the Witmer Building when Earl G. Witmer owned it. Since 1962 it has been the Buster Building, until it was sold in the 80’s and extensively remodeled.

The First National Bank of Redlands occupied the corner for many years with Austin T. Park and Jay C. Sexton as managers. This was perhaps the busiest corner in Redlands for many years, traveled by street cars that turned here to proceed to their East Citrus Avenue car barns.

The current owners, the Valencia Group, an Irvine-based venture capital group with Matt Claybaugh as managing partner spent more than six months refurbishing the building. They replaced the roof, repaired damage from a car crash, and removed vandalism, doing a major overhaul, finishing with the eye-catching burnt orange exterior paint.

The structure is rectangular with two stories and extends around Citrus and Orange Streets. The second floor is inset slightly with corniced parapet above the first floor stores. The cornice trim is geometric with the piers extending with geometric ornamentation. Storefront piers divide several stores on the west side with nine double ­hung, archivolted, trimmed windows on the second floor on the Orange Street side with six circle windows above. The roof appears flat because of the parapet but is actually a truncated hip roof. An original door is visible from the Orange Street side and has ornamentation surrounding. In the alleyway (or back) the history of the building is evident. Original brick has been painted and utility pipes are evident.

Researched and written by Liz Applegate.