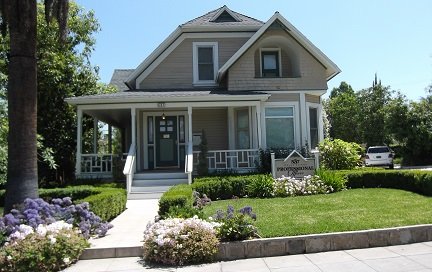 Alonzo and Mary Cummings were the first owners of the home at 537 Cajon Street and the city directories list Mr. Cummings as an orange grower. He came to Redlands later in life when he was about 77 years old and Mary was around 47. Alonzo was a native of Illinois and was very active back east according to his obituary of November 11, 1909. Mr. Cummings was an educator, editor, and public citizen. One would assume he was active in local government. They lived in their Cajon Street home for nine years. Their daughter, Sophia, was a senior at Redlands High School when her father died. Her mother, Mary Bishop Cummings, died at Big Bear Valley on August 18, 1945 at the age of almost 95. According to the records at Hillside Cemetery, Sophia Sarkis handled the burial arrangements.

The front of this home faces west and has an attractive semi-enclosed porch of wood shingles. There is an identical porch on the north side. The main building has shiplap siding and the foundation is covered with vertical shiplap. Under the porch is a bay window. One window of the bay has been replaced with a door. Four wooden steps lead to the wooden porch which is supported by wooden posts. The steps have stick railings and the balustrade has a Chinese effect. The front door has square glass panes at the top, a small shelf below, and a large inset wood panel at the bottom. On either side of this door are side lites.

In 1908, following the Cummings residency, Mont and Stella Chubb occupied the home. Mr. Chubb was a druggist at 28 East State Street. Orange grower William Preston and his wife Grace lived there in 1913. From 1916 – 1925, the Darling family lived there, father Henry, mother Josephine and their three children: H. Gilbert, Madeleine, and Alvarita. From about 1927 to 1947 the house was a rental. According to directories and building permits, Thomas and Angela Smith occupied the house from 1954 to 1976, and from 1976 to 2003 Ronald and Andrea Orrantia. The Orrantia’s built the garage for an office and storage space. The present owner, Dr. Regina Liwnicz, purchased the home in 2005 and remodeled the interior from a single family dwelling to an office facility. The back and north side of the home reflects the changes required to convert the structure for offices and handicapped access.

Regina and her husband, Boleslaw, were born in Poland under the communist regime. They left Poland for Sweden in 1969 to escape the religious persecution of their Jewish faith. From Sweden they came to New York where Boleslaw completed his residency in Pathology and where the couple married, followed by a two year fellowship at Stanford. In 1978 Dr. Liwnicz had his first academic position in Cincinnati, Ohio. Mrs. Liwnicz graduated from the University of Cincinnati School of Medicine in 1989 with a MD degree. In 1990 Dr. Boleslaw Liwnicz became a Professor of Pathology at Loma Linda University Medical Center and Dr. Regina Liwnicz completed her residency in Psychiatry at Loma Linda in 1993. Their son and daughter are graduates of Redlands Senior High School. Dr. Boleslaw Liwnicz passed away in 2003.

Dr. Regina Liwnicz had a dream of owning her own office space and looked at several homes that would fulfill her dream and meet the City of Redlands adaptive reuse prerequisites. The city required her to take everything down to the studs and install all new fireproof insulation, wiring, plumbing and fire sprinklers, and handicapped access and restroom facility. All the moldings were replaced and matched to resemble the original. The hardwood floors and the red brick fireplace remain the only original items on the first floor. Dr. Liwnicz removed the back kitchen for a reception area and created a hallway to allow access to the rooms used for office space.The feeling inside the offices is very calming, comfortable, and private. All work was completed by local craftsmen.