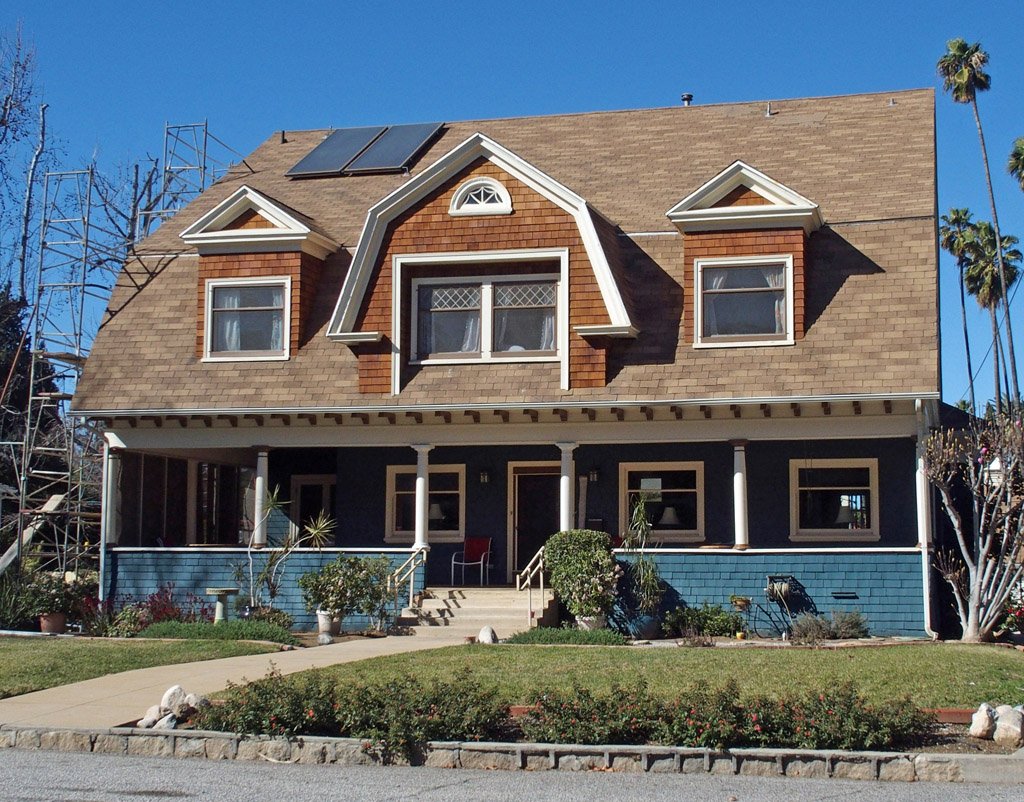 Mrs. Gertrude W. Bowers bought eleven lots on Cedar Avenue where she had Davis M. Donald construct five houses, all variations of the same floor plan. In 1902 the Redlands Daily Facts published a building edition highlighting new construction finished during 1901. Included is a picture and the following description: “The Bowers House on Cedar Avenue is another pretty house well worthy of mention. It is that built by Mrs. G. W. Bowers. Here the Dutch Colonial style with gambled roofs has been closely followed. The shingled roof and sides give rather a dark effect. It is a double house, with large front porch, and a frontage of 40 feet. There are ten rooms with large hallways. The interior is finished in redwood.”

The Colonial Revival style refers to the entire rebirth of interest in the early English and Dutch houses of the Atlantic seaboard which became the focus of public attention as the country neared its centennial in 1876. By the late 1890’s vernacular versions were being built all across the country. Ten percent of Colonial Revival houses were built with a dual-pitched gable, known as a gambrel roof, which has occurred on some of the original Dutch colonial houses. 1120 Cedar has a gambrel roof. The end-gable attic windows are flanked with scalloped wooden shutters and topped with a carved wooden fan, forming a modified Palladian window. The eastern gable also has a framed round window. The front facade is dominated by three symmetrical dormers, the two outside ones with triangular pediments and the larger, central one with a gambrel rood and semi-circular Palladian fanlight. The full-facade front porch is supported by seven Tuscan columns which are topped by handsome entablature decorated with dentil brackets. A closed look shows they are wedge shaped with flared ends showing the Oriental influence the contemporaneous Craftsman style promoted. There are 4500 square feet of living space.

Though 1120 Cedar may have been rented out the first few years, the tax records show it was purchased in 1906 by Mrs. C. W. Cartlidge, whose husband had been secretary and treasurer of the San Bernardino Valley Traction Company. Mrs. Cartlidge and her four daughters moved in and lived there until 1953. Annette Cartlidge, a daughter, was a music teacher at the University of Redlands and a founding member of the Spinet. After almost 50 years, the Cartlidges sold the house to Allen A. Brewer.

In 1960, Dr. and Mrs. Robert Rosenquist purchased the home. In 1973, it was sold to the present owners, Dr. and Mrs. Carl Jansen. Marguerite Jansen they were looking for a larger, old house because of the fine details and character as well as the country feeling of the neighborhood. The Jansens soon replaced a dilapidated carriage house with a beautiful gambrelled garage. They have recently done some foundation work.

The Redlands Area Historical Society commends them for their fine preservation and consistent maintenance of their historic house.