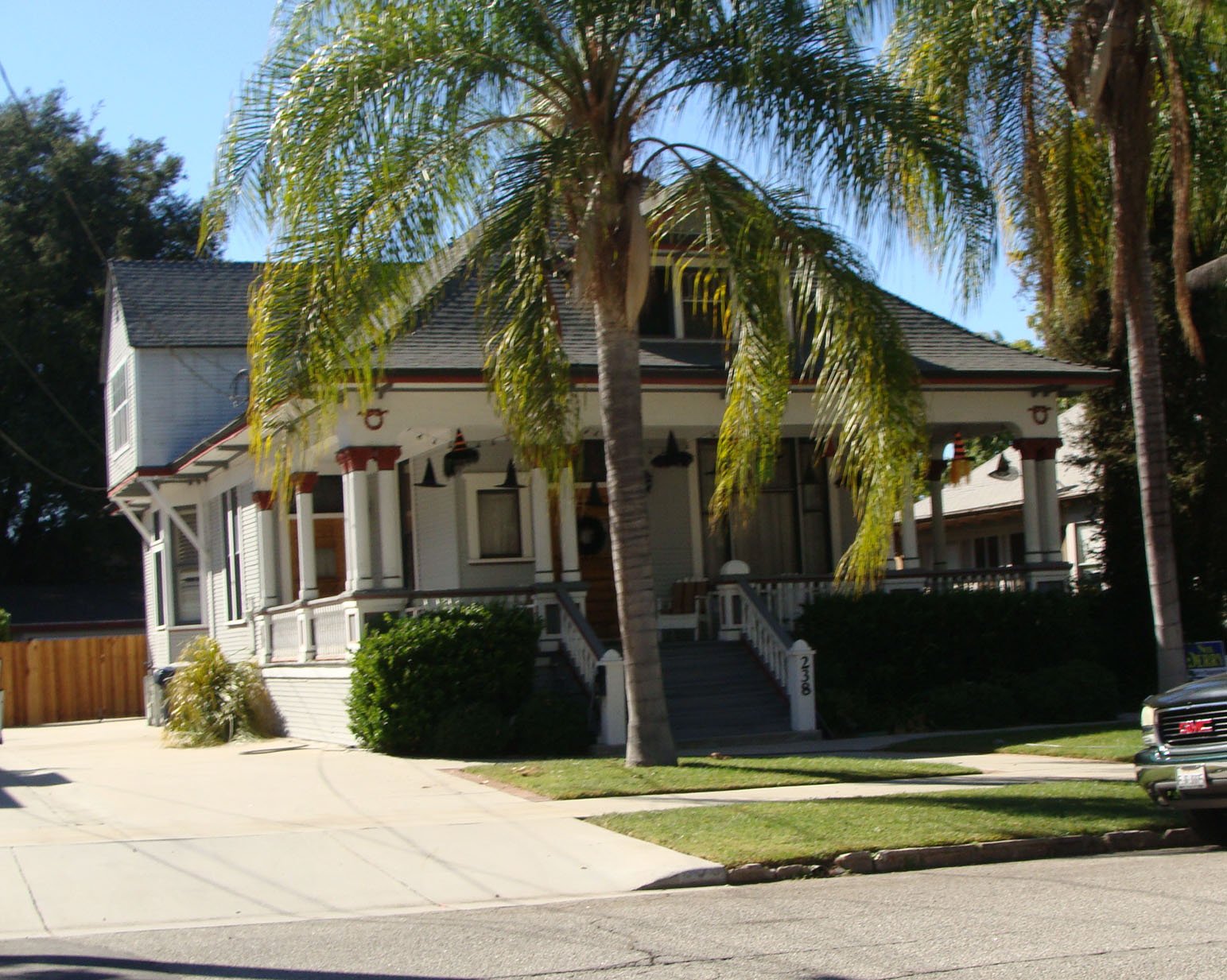 The Redlands Daily Facts building list of 1901 lists E.E. Major as constructing a house on Alvarado Street for $3,700. The contractor was E.E. Haynes. Dr. Elverton Major was one of twenty- five doctors that belonged to the San Bernardino Medical Society in 1902. He was a member of the Fortnightly Club in 1902 and from 1904 to 1910 served as a trustee on the Smiley Library Board. In 1910, he submitted his resignation as a trustee because he was leaving Redlands.

This one and one half story Victorian Cottage has a bellcast hip roof with projecting eaves and brackets in sets of two. A centered dormer with a high, bellcast gable faces east. The top of the dormer contains an inset pediment of wooden shingles. The eaves of the dormer extend forward with brackets. Beneath the pediment are three windows. The center window is fixed with a leaded glass transom. The two side windows open in and are of leaded glass. Beneath the dormer is a wooden veranda which wraps around the front of the house. Applied to the frieze of the veranda are four wreaths topped with bows. The veranda is supported by twelve Corinthian columns topped with acanthus leaves. Some of the columns are grouped in sets of twos or threes. The veranda balustrade and step railings are of turned wooden spindles. There are three doors that face east, opening from the veranda. The front door is paneled with a glass insert. The two side doors are identical to the front door but smaller in size. The house is covered with clapboard siding.

In 1912, Charles Ferguson, a pruner, lived in the home until his death in 1918. Eunice Ferguson, a sales clerk at Leipsic Dry Goods (a ready to wear ladies garment store on State Street) was identified as the resident in 1919. In 1941, Mrs. Maytie Goodloe, a nurse for the House of Neighborly Services, lived there. Matthew Skuce, an orange grower, was the resident in 1944 and in 1967 Bill Woolery, a sheet metal worker for Sanborn Heating and Air Conditioning, lived in the home. William Tee lived in the house in 1985.

In 1989, Don and Lorie Anderson moved to Redlands from Mesa, Arizona. They wanted to purchase an older home they could bring back to life. They were attracted to this house by its Corinthian porch columns. The house had been used as a rental for years and was divided into three apartments. When the Andersons purchased the house it was in very poor condition. The flooring, plaster, wiring, plumbing and foundation all had to be replaced.

We commend the Andersons for their years of hard work and determination to bring Dr. Major’s house back to its original elegance.