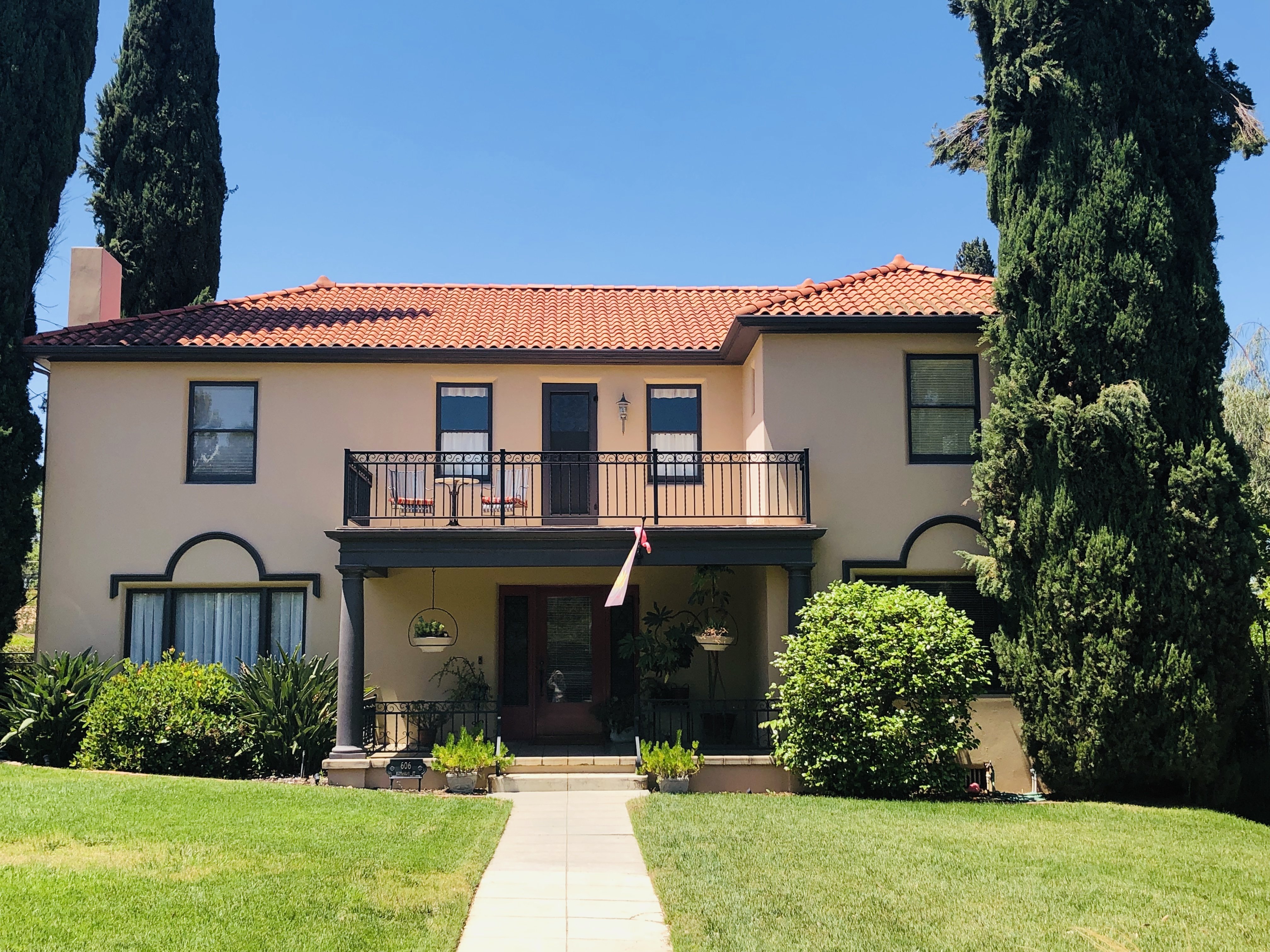 The San Bernardino County Archives tax records lists Cora J. Wilson as purchasing the land in 1926 from Gertrude A. Hayes and show a home was built in 1927 at a cost of $3,200. Cora only lived in the house for two years before her passing. She was a native of Massachusetts and moved from New Hampshire to Los Angeles for three years before coming to Redlands. She died on July 9, 1929 and funeral services were held in her home at 606 Alvarado St. before burial in New Hampshire.

The Partija Amena Tract consists of only eight lots on the west side of Alvarado St., south of Cypress Ave. The home is on lot 2. The origin of this tract and the meaning of the name remains a mystery.

The architecture of this home is Italian Renaissance and is asymmetrical in shape. The front or east side is “L” shaped and the back is “H” shaped. The roof is a low hip of red tile. The windows are a combination of double hung and slender glass panes that open in. The stucco siding is molded around the windows and doors to give them an inset feeling. In the middle of the second story is a balcony with a black metal balustrade. Under this balcony is the centered front porch. Two columns support the balcony above. The front door has a large rectangular glass pane at the top with wood below. On either side are side lights with metal decoration in the glass. The cement porch has the original metal balustrade. On either side of this porch on the southeast and northeast corners are identical windows with a large fixed window with slender windows on each side. Above each window is a half-circle wood decoration applied to the buildings surface. Two large Italian cypress trees flank the home.

The back or west side of the house on the second floor has a balcony. Under this balcony on the first floor are two sets of French doors opening onto a patio. A shed-like cover of red tile and two large brackets support the balcony above. There are two more patio areas on the north and south side. A detached garage is southwest of the home. On the north side of the yard is a swimming pool and behind the pool is a beautiful flower and herb garden. On the south side is a play area and shed. Right in the middle is a very large, old oak tree.

With further discussion on more residents of this fine home, we note that in 1934 Clifford T. Norwood, Cora Wilson’s nephew was awarded the home. It remained vacant until 1937 when it was sold to Louise Duke, a widow. Mrs. Duke’s husband, Victor Leroy Duke, was the second President of the University of Redlands from 1914 until his death in 1933. Louise lived at 606 Alvarado for five years. In 1942, J. Warren and Catherine E. Roach purchased the home and lived there until 1968. Mr. Roach passed away in May 1975. His obituary in the Redlands Daily Facts states:  He came to Redlands in 1917 and graduated from Redlands High School. He worked his way up from bookkeeper to manager of the First National Bank. In the 1960s, he transferred to the San Joaquin Division retiring in 1965 and becoming Tulare County Inheritance Tax Appraiser for the State of California until 1971.

After the Roach family moved in 1968, there were five more families that bought and sold 606 Alvarado. In 1985 Arthur Svenson purchased the home. He has lived here for 34 years making him the longest owner of this property. Art Svenson has been a professor of Political Science at the University of Redlands for 38 years. He was recognized twice as the Professor of the Year at the University and also, is a two-time Fulbright Scholarship recipient. Nancy Svenson also works at the University of Redlands as the Associate Vice-President for Enrollment Graduate and Professional Enrollment. Together the couple have made a wonderful team on the restoration of their home which was slightly enlarged to include a new kitchen, master bathroom, patio, rear porches, and pool – all to give the viewer the impression these additions were always in place – all built to the integrity of the home.

The Redlands Area Historical Society give our best wishes to Arthur and Nancy Svenson for their continued stewardship of 606 Alvarado and much happiness in the years to come. For maintaining and improving this beautiful home we present them this 2019 Heritage Award.