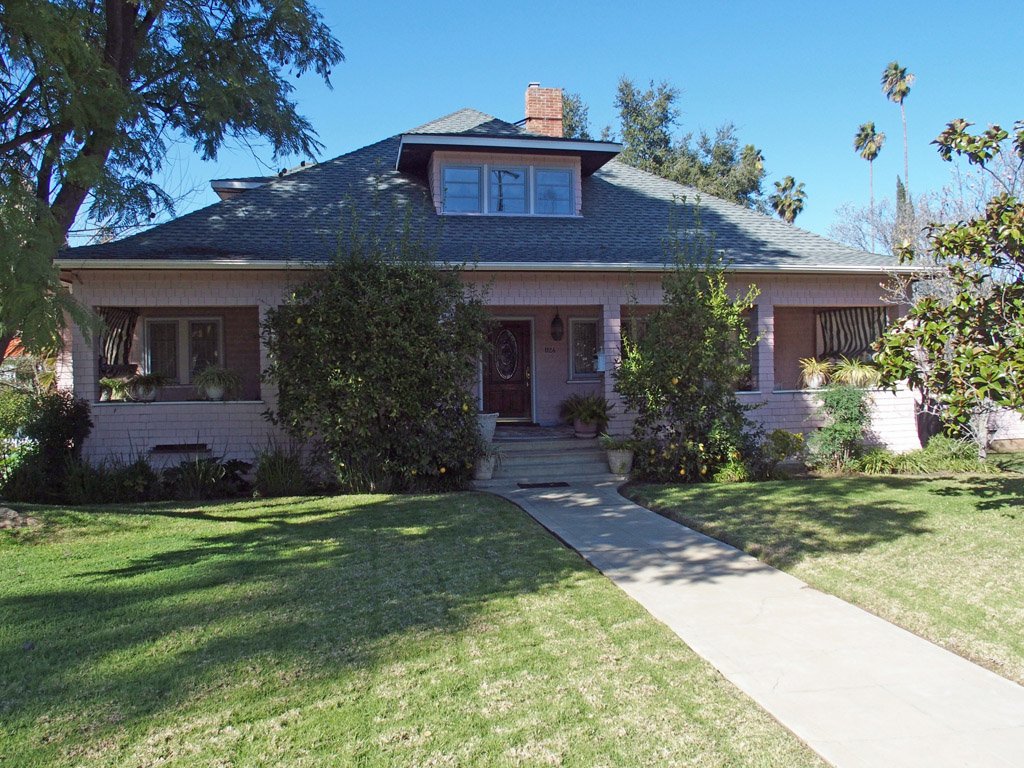 Gertrude Saunders Bowers was a very wealthy lady and owned property throughout Redlands. Her first husband, George W. Bowers, owned a gold mine, the Harqua Hala bonaza, in Arizona along with his partner, A.G. Hubbard, another important early resident of Redlands. Her second marriage was to Colonel C.B. Saunders, an associate of her husband. Mrs. Bowers had several houses constructed on Cedar Avenue by Davis M. Donald. They were used as investments as she lived in a mansion on Crescent Avenue. Mrs. Bowers lived in Redlands for about sixteen years until she passed away suddenly on December 26, 1911 in her home. Her father was a noted Lutheran minister, Rev. Charles Adam Smith. Her mother, Matilda Lasebl, was a direct descendant of the Plymouth Colonies. Funeral services were held in the home on Crescent Avenue.

The Bowers cottage is two stories with a medium bellcast hip roof. The siding is wood shingle and the foundation is of rock. There is a full size basement beneath the house. Because of a fire in 1995, the house has been completely restored according to code. Raymond Hornby purchased the property from Mrs. Bowers in 1914. He was an orange grower. The address was then 724 Cedar. The address change came in 1921. In 1952 Redlands City directories list a Laurence and Margaret Clark. Laurence was a piano tuner and both the Clarks were supporters of the Redlands Bowl. Many old timers refer to this house as “The Clark House”.

The property has old trees, such as the carob tree on the east side. On the second story of the house is a dormer containing a three-sash window. Under this dormer is a cement porch with a plain frieze of wood shingle. Six wood singled posts support the porch. Wood shingles also compose the porch’s balustrade. Local artist Rick West as part of the renovation designed the new Art Glass oval front door. Across the front of the house are combinations of windows, most of which have cranks to open the windows outward. In the back of the cottage, the kitchen opens onto a new redwood decking.

In 1967, Redlands City directories list a Dr. Joseph Young then in 1970 an Eric L. Nutt is listed. In October of 1978, the present owners, Dr. and Mrs. Gary Schwartz purchased the property.

To quote Mrs. Schwartz: “We truly feel this home is a family home and represents some of the best, most comfortable things about living in Redlands. Nothing is for show, we live here – in not a pretentious house.” After the fire occurred in May of 1995, the Schwartz had to make a decisions to rebuild the house or tear it down. The year before on November 19, 1994, Mrs. Schwartz’s son passed away. Airman First Class Keir Damon Johnson. When his personal belongings were delivered to her, she found an entire documentation of the house with photographs of each room. With these photographs, the decision to rebuild was decided upon. Without this account of the house restoration would have been impossible.

The Redlands Area Historical Society is pleased to present this Heritage Award to Dr. Gary and Linda Schwartz and to Keir Damon Johnson for their love of 1124 Cedar Avenue.