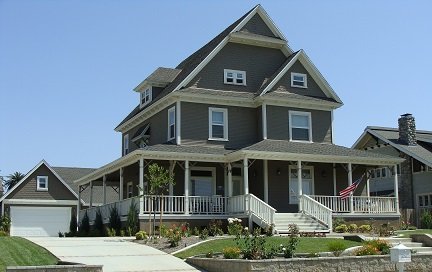 Henry Moore was born in New Haven, Connecticut in 1838. At about the age of 17 he went with his uncle to the West Indies and worked in the sugar trade for three to four years. Returning to Hartford, Henry had a wholesale carpet business until 1882 when he traveled to Grenada and Nicaragua to follow commercial pursuits. He then returned to Hartford and began manufacturing paper and wood pulp. In the spring of 1891, he moved to California and chose Redlands for his home becoming an orange rancher on Terracina Boulevard. Both he and his wife, Frances, became very involved in the community. Mr. Moore was the president of the West Redlands Water Company and a very active member in the new Redlands Horticultural Club formed in February 1897.

The home is a two and one-half story open gable structure with a wrap-around porch. The high pitched roof emphasizes the vertical elements in its design. The home features double hung windows with fixed panes over the widows on the first floor doors and windows. The front porch has a wooden balustrade in between the simply decorated posts that have corner bracing. The porch eaves have decorative brackets. An upper story window has a unique double wooden awning that is supported by similar bracing found in the first floor porch. A second story porch projects from the basic facade of the building built with similar trim as the porch below. The attic story has a dormer window. The home has ship-lap siding on the first two floors, with fish scale siding on the upper story.

According to the Redlands City Directories, Frances Moore is listed until about 1911. Other owners that followed were: Stephen and Florence Thorne (1915-21), Frank and Nellie Fox (1924-27), James and Maggie Goodloe (1927-1939). Mrs. Goodloe was a sales lady at the Sidney T. Smith bookstore and a nurse for the House of Neighborly Service. In 1941, Harry Higdon, of the Redlands Plumbing Company, and his wife Lois were listed. Between 1947-50, Edward and Anna Marie Noe lived in the home. Mr. Noe was a route deliverer for the San Bernardino Sun. Lt. Col. Corb Flick and his wife Lucille lived in the home between 1954 and 1965. At this time John and Christine Shone purchased the home. John was the Public Works director of the City of Redlands.

The Redlands Community Hospital purchased the home and in 2006 and obtained a permit to remove the home for the expansion of the hospital campus. Terry and Geneil Vines moved the home to its present location on Clifton Avenue. The home was purchased by Allen and Lori Osborn in 2010. The Redlands Area Historical Society commends the Osborns for their continued stewardship of this stately example of early Redlands architecture.