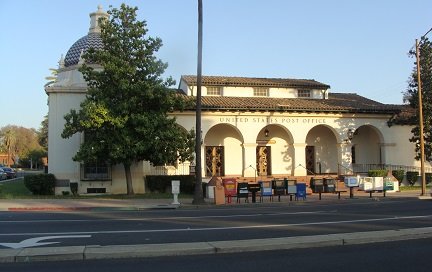 Designed by the renowned architectural firm of G. Stanley Wilson, this beautiful structure located at corner of Brookside Avenue and Eureka Street is an eclectic mix of architectural styles. The building does not conform to the classical symmetry that is typical of most post office structures, instead it has an irregular plan and massing that provides a picturesque effect. The prominent feature of the building is its Moorish influenced octagonal tile-covered dome, topped with a concrete lantern. The structure has a tile roof, dormer windows which light the public lobby of which exist in only two other surveyed post office buildings. The exterior arcade is supported on heavy piers with simple impost molding on the piers. Wrought iron grillwork fills the spans of the interior arches. The Mission Style emphasizes mass and solidity by cutting windows into the walls to reveal their thickness and by the use of piers instead of columns to carry the arcade.

The predominant character of the building is considered Mission Style, but elements of the Spanish Colonial Revival are used throughout. This is consistent with Wilson’s other designs such as found in the Riverside Mission Inn, Corona High School, and many other public buildings in the Inland Empire.

Wilson was born in England in 1879. He came to Riverside with his family in 1895 at the age of 16. He began his career as a carpenter in Riverside in 1901. He constructed many residences in Riverside while working for the firm of Donald J. McLeod. In 1909 he opened his own office and began to work on several projects for Frank Miller at the Mission Inn. He worked under the architect Myron Hunt on the Spanish wing. Wilson obtained his architectural license in 1923 from the International Correspondence School. He employed several architects including Peter Weber.

The site originally was comprised of four lots with apartment buildings and single family residences in the Ladd Tract. The Brookside Avenue structure replaced the former post office building located on the corner of Fifth and State streets. Postal service was established on November 5, 1887 in Lugonia. On April 5, 1917 a H.R. 2301 was introduced by Hon. William Kettner “for the purchase of a site for a public building at Redlands, San Bernardino County, California.” A campaign was mounted to convince the Postal Service to build a new post office in Redlands . The present site was selected in December 1931. However, the cost of the site was $10,000 more expensive than the $25,000 allocated by the government. Concessions were secured from the property owners and a committee secured contributions from Redlands citizens.

The firm of North-Meller, Jackson, Michigan submitted the low bid of $104,989 to construct the building. Construction work began in March of 1933. However, on January 16, 1934 work was halted due to unsatisfactory progress. A new contract was awarded to the Los Angeles firm of Sarver Voss to complete the project. The structure was finished and open for business on July 28, 1934. The Redland Post Office was placed on the National Register of Historic Places in 1984. The building was deemed locally significant as a rare extant example of a locally prominent architect’s work, was well as acting as a major urban design element in Redlands. The building also has state significance, when considered in the economic context of the early 1930’s. It possesses high artistic value and is a distinctive example of a type, period and method of construction.

The Post Office structure was carefully remodeled by the local architectural firm of Day and Armantrout in 1982. The remodeling effort added a handicap accessibility ramp, and reconfigured the interior lobby space adding additional post office boxes.

The Post Office building retains the integrity of location, design, setting, materials and workmanship. It is an exceptionally well preserved example of an early 1930’s post office. It demonstrates the use of Mediterranean/Mission Revival architectural style prevalent in federal construction during the Great Depression. Frank E. Moore wrote on July 8, 1995 that the Redlands Post Office is the pride of Our Town. The U.S. Postal Service is to be commended for their stewardship of this historically significant structure.