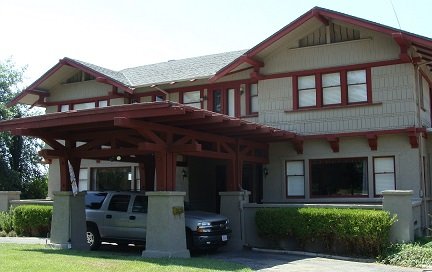 This beautiful example of an Arts and Crafts house has graced 1120 W. Fern Avenue since 1911. It was built by Harry A. Cherrier, who came to Redlands from the Chicago area, where he might have been exposed to the new buildings built there by Frank Lloyd Wright. Unfortunately, there are no building permits to be found, nor written records about the builder or designer of this home.be found. But it has come to light that later in life, the daughter of the Cherriers mentioned some possible names for these roles, so the research will be on-going.

The twin gables with low-pitched roofs flank an impressive front entrance anchored by a wide porte-cochere. The large overhanging eaves with their exposed, projecting rafters add to the broad horizontal facade. Along the entire width runs a porch where one admires the large Japanese-inspired open-shaped corbels. These hang above a subtle “cloud lift” molding topping the large windows. Massive tapered piers hold heavy wooden beams with interesting braces, supporting the roof. This roof, in turn, is a balcony which is accessed from the second floor. At one time, the family relaxed here on wicker furniture. All these multi-angled and multi-planed details add great interest. The inner ceiling features narrow unpainted wood slats. The simple front door with its sidelights is even further recessed, again reflecting the bungalow concept of a gradual transition from the outdoor world to the interior of the dwelling.

Photos still exist that chronicle the construction of this beautiful home. We clearly see that that plaster is applied to a solid brick base. Even the small openings at the side base of the porch are seen to be finely bricked before receiving its final finish. This house was to be the winter home for this railway executive. As such, Mr. Cherrier installed two secret panels for hiding their valuables when they left to go back to Chicago for the summer. At the time of construction, the property of 10 or 20 acres was already a mature orange grove, started by the C. H. Baughmans. They were a pioneer family in Redlands, arriving in the 1880s.They were paying taxes on this lot in 1898, if not before. They lived on the property until 1910, but the fate of this first home is unknown.

Interesting details are not confined to the front view. The side elevations show the Craftsman concept of clustered windows with extended lug sills. The large numbers of these, plus extra doors, again show the ease of interacting with the outdoors. Large supporting beams cross at the corners, balancing the view of the beautiful large eaves. From the rear can be seen the enclosed sun room. The upper floor on each elevation is faced with painted wooden shingles laid in an unusual pattern. The many striking features of this residence recall the influence of brothers, Charles Sumner Greene and Henry Mather Greene, and other architects who sought to create harmony between the California landscape and an adaptable, comfortable living space. Also somewhat different is the shape of the vents. The two chimneys reflect a modern design. The house has two back-to-back fireplaces that share one chimney, while the other one was for the kitchen stove. At the back of the property is the old carriage house and barn. Behind it is an access to another street.

The Cherrier family enjoyed this home until the early 1920s. Two notable events were the death of their 16 year old son from a fall from a horse, as the family was preparing Christmas dinner. A happier occasion happened behind these windows, as the house was transformed into a flower-filled bower for the wedding of their daughter Ruth. It was reported in the newspaper that 125 guests, under canopies of ribbons and flowers were entertained by a 6-piece band.

Several times this home has been photographed for publication. Once was during the ownership of James and Jennie Ohlman. They listed themselves as orange growers. They are listed in the city directories from 1927 until the early 1940s when Edward Fletcher took pleasure in living here. He was a 1923 graduate of Redlands High, and worked with his father, running a successful planing mill. He was also an inventor. Like Mr. Cherrier, who was the president of the Chamber of Commerce for several years, Mr. Fletcher was active in Redlands politics. While living in this house, he was mayor of Redlands for 2 terms, ending in 1946. One of his activities was looking for enemy planes over Redlands during WW2. There have only been 5 previous owners to this little-changed home of 5,000 plus square feet. A photo also appeared as a postcard of unknown date. Builder J.B. Sooy maintained it well during his occupancy from 1959 until 1975, taking out permits for various improvements. For almost the next 30 years, Dennis and Pat Wilson were the careful owners, raising their 5 boys here. Besides enjoying all the special small details of this house, such as the little Japanese shape on the porch, they were interested in the history of their home. After much research, they gave a collection of clippings and photographs to the 6th owners, the Mortensens, when they moved in, in 2005. The latest depiction of the house was just this year, featured on the tee-shirt for A Run Through Redlands.

The high quality of workmanship has enabled the 6 families 100 years of enjoyment. In the living room and also in the dining room are sliding doors of beveled glass and richly stained cherry wood. The downstairs floors are of oak, and upstairs, of maple. The newel post is especially handsome. Brent has been busy finishing the basement, but this shoeshine contraption certainly pre-dates him.

The Mortensens also spend a lot of time outside, where they have extensive gardens, and even chickens. The beautiful grounds attest to the pride this young family takes in their lovely home. The Redlands Area Historical Society is pleased to award this Heritage award to Brent and Jennifer Mortensen for the hard work, careful maintenance, and preservation of this historic Arts and Crafts home.