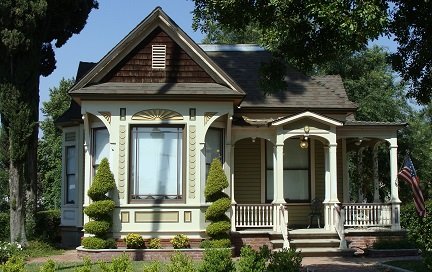 One of the pioneer residents of Redlands is Truman W. Ladd. He bought land on Brookside Avenue in 1882 along with fellow Eureka Mill miners David Morey, Thomas Inch, and John Hosking. Ladd was in Virginia City, Nevada in 1851 using his blacksmith skills. He returned to Detroit and built wagons until catching “California Fever” again in 1859 and returned to Virginia City by covered wagon finding millwork in the Eureka Mills Mines. He moved to Redlands in 1882 building a home on the corner of his twenty acres on Brookside and Grant Street. He invented an irrigating conduit in 1890 later called a “flume.” This patent revolutionized irrigation throughout the United States.

Ladd died in 1892 but before passing subdivided his 20 acre grove of lemons and oranges for residential homes. A brass band played at his funeral illustrating much community support for this pioneer. Resolutions of respect were printed in the April editions of the Redlands Citrograph.

More money could be made quickly in building and selling home lots in Redlands while the fledgling citrus industry grew. In Ladd’s First and Second Additions he sold lots and had homes built.He built both 5 Grant and 7 Grant with 7 Grant completed in 1888 and 5 Grant in June of 1891. Both homes were rented and later sold to new arriving families. His daughter, Mrs. Annie Ladd Martin, lived in the Ladd pioneer home on Brookside until her death in 1931.

Seymour Brothers lumber mill completed the Victorian cottage using a variety of decorative motifs to advertise their woodwork.Today the gabled roof is composition shingle.The foundation is brick. An angular bay window with fish scale shingles along both sides of the window is prominent from Grant Street.This same window has a sunburst above the window and ¼ sunbursts sculptured into the wood.The porch is one of a kind. Six square pillared posts support a monumental gable entrance above the porch.The porch is enclosed with a stick style balustrade offset by a three color paint scheme to bring out the woodwork. Rounded knobs on the porch brackets and bracket fixtures are used in place of spindles. The west side of the cottage has a angular bay window. The east side gable has crossing timber.Between the first story and roof line the entire home has a boxed cornice painted in a three color theme. The ribbon driveway leads to a garage.Decorative spiral plants grow on either side of the front bay window.

Past owners for this Victorian Bungalow run the gamut. From at least 1923-1936 James G. Vickroy listed as a carpenter and rancher owned the home. Elmer R. Benedict did porch repairs in 1944 and plumbing in 1947. William E. Hatcher did more plumbing repairs in 1950. In 1974 William DeBlauw fixed the roof. The champion for repairs is very evident in city archives with Scott Bernart redoing the roof in 1991, replacing the porch and cover in 1992, and building a new garage in 2003. Today both 5 and 7 Grant Street are owned by Scott and Nancy Bernart. Truman Ladd smiles from on high knowing his two speculative homes are in good hands.

Scott and Nancy Bernart tackled a tough restoration in the 1990’s and have prevailed with steadfast determination ever since.Their efforts certainly deserve a 2012 Heritage Home recognition.