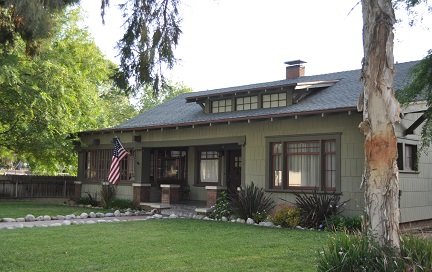 After the founding of the University of Redlands in 1909, it was soon realized that a residential tract as close as possible to the campus was desirable. North University Street lies on the western edge of the campus, and 805 is the corner house, across the street from Sylvan Park. The building permit was issued in 1910, and what we see is a perfect example of a California Bungalow. It is no higher than the bungalow definition of 1 ½ stories, and exhibits the low, wide façade of this early 20th century style. Note the very shallowly pitched roof. Also, the shed-roof dormer with its three sets of windows and knee-braces adds to the horizontal profile.

As with many Craftsman homes, the materials lend themselves to the concept that the house is firmly attached to the ground and has risen naturally from it, starting with a river-rock and brick foundation, surmounted by wooden single siding in earth tones. The wide porch is a transition zone-a bridge between the outdoors and the interior living space. From the front façade is also seen another example of this principle, a now-enclosed sun room, sitting on sturdy brick piers. At one time this was open, but the current owners have used some original siding to maintain a uniform appearance. The back of the sunroom is the original outside of the house, with a French door and wide wood casements. The vertical shingles are extra-long, with a large overlap. Wide eaves shield the sides of the house. On one side of the house, there are 2 large “bump-outs”. One is for a built-in wooden window-seat, and the other for a built-in cupboard in the dining room. Over these projections are wide eaves, a practical and beautiful addition found in many Arts and Crafts houses.

This interesting home has held the hearts of its owners to such an extent that there have only been 4 previous families in its 100 year history. Although the building permit was granted to W. E. Clatworthy, the first occupant was Herman A. Westerbrook, a civil engineer for the city of Redlands, followed by the Bugbees, orange growers and ranchers. As might be expected, one of the professors at the university also chose to live here. W.B. Olds was a voice teacher and then the director of the music department. He was active at the time the university became the proud possessors of a Cassavant organ. An internationally known organist was invited for its dedication, but due to defective electrical lighting, this 1928 concert was delayed by an hour. So, Professor Olds delighted the audience by leading the a cappella choir to fill the time. Then in the 1940s, the Reynolds family moved in, never to leave until the last 2 unmarried sons died there in 2000 and 2003. The inheriting nephew sold the house to its present owner, Linda Weck and her son and daughter-in-law, Cory and Lori Weck.

Luckily, Linda and Cory have experience in renovating old houses, and they needed their skills to bring this house to its current beauty. After clearing out extra foliage, work began on the plumbing, roofing, and electrical wiring. The commitment to period details include light switches in the old push-button style, and custom light fixtures. The colors for the exterior were also carefully researched. The lovely tri-colored paint is a welcome change from the brown paint still found on the shingles on the garage facing the alley. As was the custom in those early days of the automobile, the garage used the same lattice vent design and other construction details, but was away from the house.

As mentioned, sons lived in the house for 60 years and apparently just enjoyed the house as it was without much maintenance or change. Not many new owners would take on such a challenge. But Linda loved the original features. A dual-sided fireplace has one face to a large open area, and the other side to a cozy wood-ceiling and paneled study, complete with built-in desk and bookcases. From the street, the eye is led invitingly up the brick sidewalk lined with river rocks, which one might think was an nice original touch. But only the stones are old, found underneath the house, presumably extra foundation material. Other projects are planned as well.

805 N. University Street is a real asset to the neighborhood. The beautifully authentic renovation made by Linda and Cory Weck have earned them notice by the Redlands Area Historical Society, who are proud to recognize them with a 2013 Heritage Award. Congratulations on a job well-done.