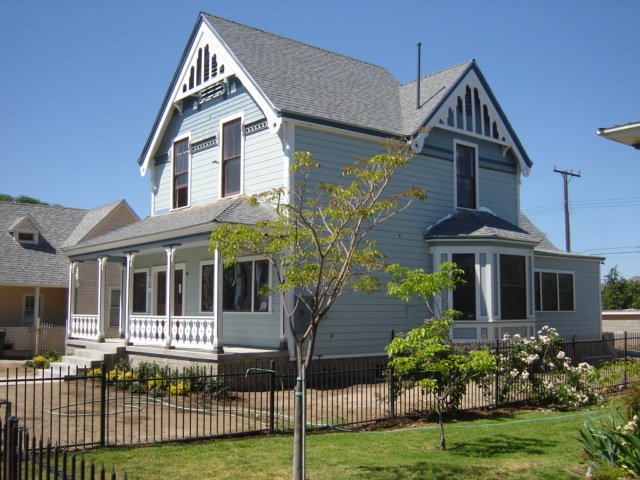 Marten Andersen, a stone mason and Redlands pioneer, built this home in the beginning of 1888. Final water connection was made April 19, 1888. Andersen came to Redlands in 1880, a year before the town was really to begin. He settled in Lugonia at 31 Times Street which is the present 831 North Sixth Street.

His home was the 115th water connection for the Redlands, Crafton and Lugonia Domestic Water Company. Original records show the home had tow stories, eight rooms, one bath tub, one closet and a horse and a cow in the barn. Cost of the cottage was $1,700 including the barn.

The Andersens rented the home to several different well known families in the late 1890’s. Mr. Frank A. Weise rented it in 1898 and the Levering family in 1899. Mrs. Florence Weise and Mrs. Lucy Levering Stark are children of these families.

Rev. Dickson, of the Baptist Church, next purchased the home around 1919. He sold it to the Charles Hughes family in 1937. Mr. Hughes worked for the Gay Ranch in Crafton. His daughter, Mrs. Ralph Hughes Johnson, resides in the home today with her husband, Ralph.

The home has had major structural changes. The upstairs is a separate apartment with its own stairway. Much of the decorative woodwork, so popular in Victorian Redlands, has been stripped from the house over the years.