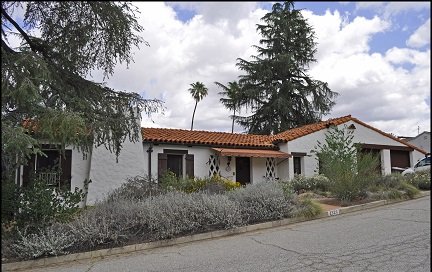 In 1928 Frank S. Mitten and his wife Mary bought 2 lots in the rather new development of Crescent Heights Tract #1982. This land was accessed by extensions of Monterey and Crescent Streets, and their street was Monterey B. This desirable location was advertised as having as its neighbors the Putnam, Sterling, and Burrage Mansions as well as Canon Crest Park. Mission Revival and Spanish Colonial architecture was well established in Redlands, forming the style basis for their new home. The front façade features rough textured white stucco, with diamond-shaped latticework flanking the front door. Yet more texture is provided by the deep window embrasures. A broad flaring chimney extends all the way to the ground. The thick walls are surmounted by a low-pitched roof of half-barrel red clay tiles. California living was further enhanced by a large walled courtyard at the rear of the house, adjoining the covered patio that runs almost the length of the house. On one side of the house is an over-sized picture window with a pointed arch, overlooking the San Bernardino valley. All of the original windows are framed in dark wood. Some beams are also seen in slight horizontal projection under the roofline.

This house has been well-loved by each of the 3 owners. They have all benefited by the attention to detail that Mr. Mitten demonstrated in planning his house. It is said that he sat on the crest of his property over a period of time to determine where to place the windows to best catch the breezes. He also chose such quality details as copper gutters and down-spouts. His lots #110 and #111 were among the first sold by Mr. Cochrane when he sub-divided 36 acres into 142 building lots. The terrain is hilly, and several levels are bolstered by stone walls to form separate areas for landscaping.

In 1929 the house was completed, and Mary and Frank S. shared the house with their unmarried 26 year-old son, Frank J. All three were involved in running the Mitten’s lunch restaurant and ice cream fountain on State Street. Mary continued with it even after her husband’s death in 1942. By then, their son had formed his own business. In the early ‘30s, young Frank J. liked to tinker after hours with an idea he had for 3-D advertising letters that could be re-used and re-arranged. These were at first pin-backed, of a ceramic mix. Eventually these became popular with movie-makers for titles, as well as for many other uses, and were produced in many fonts and sizes. This manufacturing business became a multi-million dollar enterprise that was carried out in the now-renovated brick Mitten building on 5th St. Frank J. and wife Jessie ran the business from both New York City and Redlands. His mother eventually moved, and in the late 1940s the Monterey B house was ready to be sold.

The second owners were the Fallen Family, who resided there for over 50 years. They loved the house and made very few changes. More bathrooms were desirable, however, and laundry facilities were built on a lower back level. The city renamed the street and standardized the numbering system, so in 1951, William, Helen, and Joyce Fallen’s house was listed as 1321 La Arriba Drive. Several features of the house were enjoyed by the whole neighborhood. The extensive bricked courtyard was the scene of many parties. Also used for this purpose was the large 2-car garage that was integrated into the front of the house, atypical for 1929. Daughter Joyce remembers the preparation of the floor to make a great dance space in the 1950’s and ‘60s. Another way the neighborhood children shared the amenities of the house was to peer through the large living room window to watch one of the first televisions. Mrs. Fallon remained in the house after her husband’s death in 1962, until shortly before she died in 2001.

The current owners, Jonathan and Michelle Baty, were thrilled to find the property available, and actively sought to purchase it. They were drawn by the open-beamed living room, with its slatted wood ceiling, and arched doorways. The 85 year-old details such as the kitchen and bathroom tile, light fixtures, interior plaster, and doorbell chimes are appreciated and lovingly maintained. Since being purchased in 2001, native drought-resistant plants placed by the Batys have joined original cactus found on the 15,000 square foot property. Tall deodars provide welcome shade. While the Batys and their teen-aged daughter follow active contemporary schedules, they have shown their respect for the past, and have been careful guardians of a unique Redlands home. The Redlands Area Historical Society is pleased to present them with a 2014 Heritage Award.