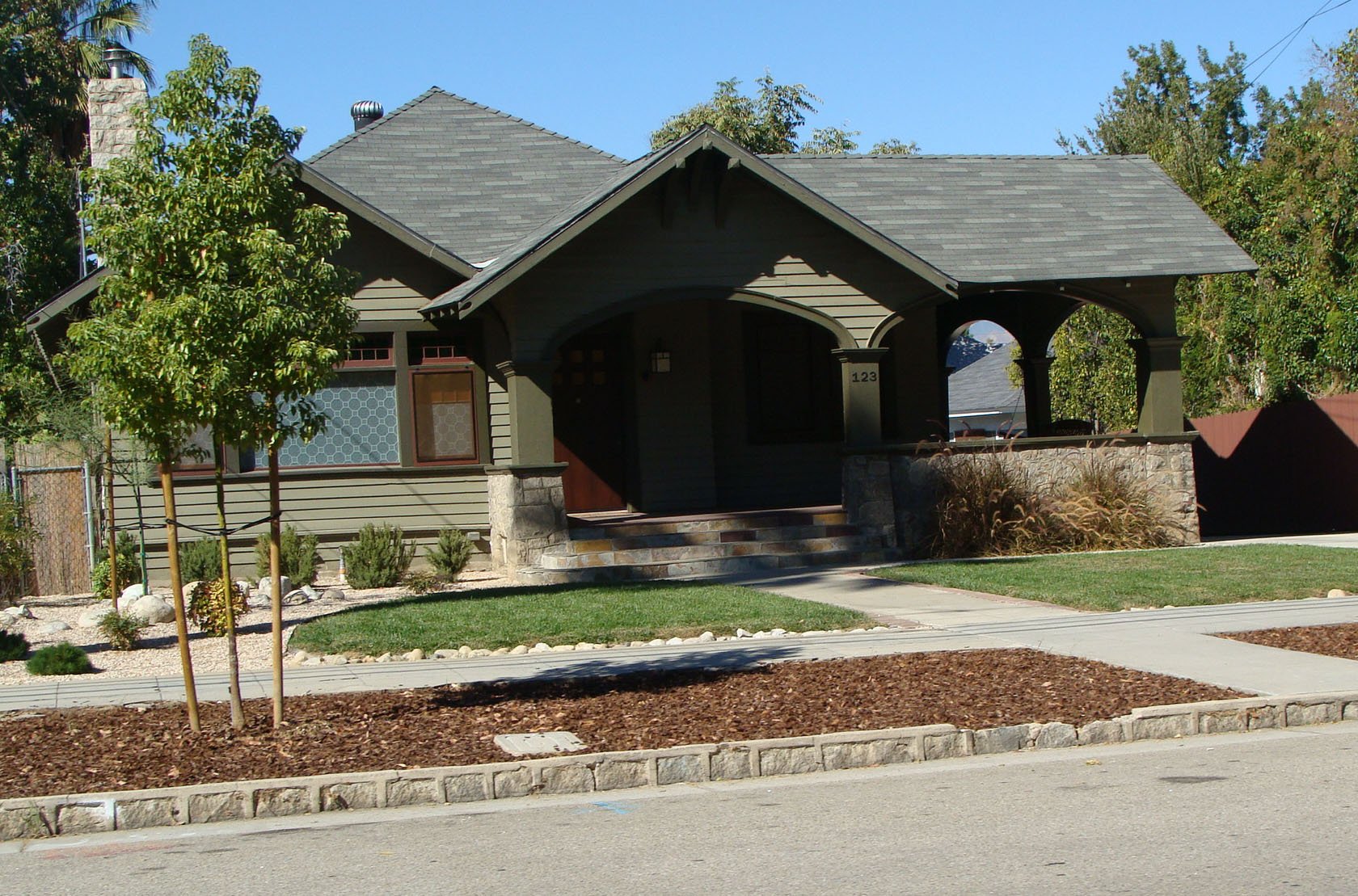 An article in the Redlands Citrograph of Sat. January 26, 1907 stated, “Mrs. A.B. Morgan has contracted for the erection of a $3500 cottage on East Fern Ave.” On Sat. April 27 of that same year it reported, “Mrs. A.B. Morgan”s new bungalow residence on Fern Avenue has been completed and Mrs. Morgan, who is from Memphis, Tennessee, and her three daughters will have a residence that cannot be excelled for solid comfort.”

The house is a square-shaped structure with a medium gable roof. Two gables face south, with one forming the roof over the veranda. The porch balustrade is stone with beading and five stone piers support the large square columns. These columns are connected with wooden arches and above the arches ship-lap siding extends to meet the boxed cornices. Brackets support the roof. The flat boards attached to the gable at the roof’s edge have a design cut in the ends, this design is reproduced on the door hinges inside the house. A large fixed rectangular window faces south. The garage in the north east part of property is the original and was built in 1910 for Mrs. Morgan after she purchased an automobile. The addition to the garage was done at a later date.

Mrs. Morgan lived in the house for two years before she sold it to Arthur and Emma Grow. Arthur Grow was the president of Redlands Abstract and Title Company located at 12 West Citrus Avenue. The Grow’s lived there until 1927 when they sold it to Herbert and Stella Gowland. Herbert and his brother, Fred, owned and operated Gowland Brothers Sporting Goods at 27 East State Street. The fourth owners were George Gardner Jr. and his wife Lois from 1943 to 1946. The next owners: Joseph Jefferies, Jr., and his wife Avrice, and son Boyd lived there from 1946 to 1950. Joseph was partners with A.W. Thompson in Jefferies and Thompson Market at 118 East State Street.

After living in a tract home the Dibiase’s decided to purchase a fixer¬upper and that’s exactly what they have been doing since then. They have removed paneling from the walls, discovered beautiful hardwood floors under the carpet, replaced old linoleum with tile, and scraped and painted walls and trim. In the process, they discovered that a closet had been made into a bathroom in the forties. The new landscaping was the final touch on a job well done.

The Redlands Area Historical Society commends Melanie and Richard for all of their efforts in the restoration of this historic resource.