In the 1897 edition of Illustrated Redlands the following appeared:

Among the later accessions to the ranks of the active business men of Redlands although not strangers, are Messr. Harris and Cook, who conduct a coal and wood business on Citrus Avenue, near Orange Street. Oscar William Harris was born in Indiana October 14, 1860, and lived in that state until he came to California in 1887. He was married to Miss Alice E. Cook, a native of Indiana, by whom he had six children, three born in Indiana and three in Redlands. After coming to Redlands in 1887, Mr. Harris went into the nursery business, growing orange stock. His nurseries here were on Highland Avenue and on Palm Avenue, where he acquired about ten acres, and he also owns a thirteen acre ranch at Highland.

An article in the August 18, 1894, edition of the Citrograph stated: 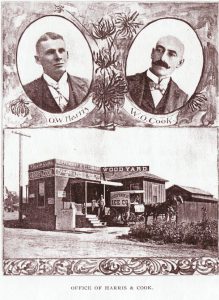 The residence of O. W. Harris on Palm Avenue was burned late Saturday night, inflicting a loss of about $500. Mr. Harris will rebuild at once.

The home was apparently rebuilt in 1895. An application for a building permit was taken out on October 28, 1905, for the building of a barn at an estimated cost of $300.

This lovely two and one-half story house is built on a cutstone foundation with exterior walls of overlapping boards. The house has a large porch extending on one side as well an along the entire front of the house. This porch is enhanced by turned columns and a railing around the entire porch. Over the main entrance is a monumental pediment that leads to the front door of light golden oak with leaded glass windows on each side. The large windows of the house feature a section at the top of each window in leaded glass. The top story features three dormers which have a gable with an overhang. The roof is wood shingles. The present owners are Dr. and Mrs. Orval J. Swarm.