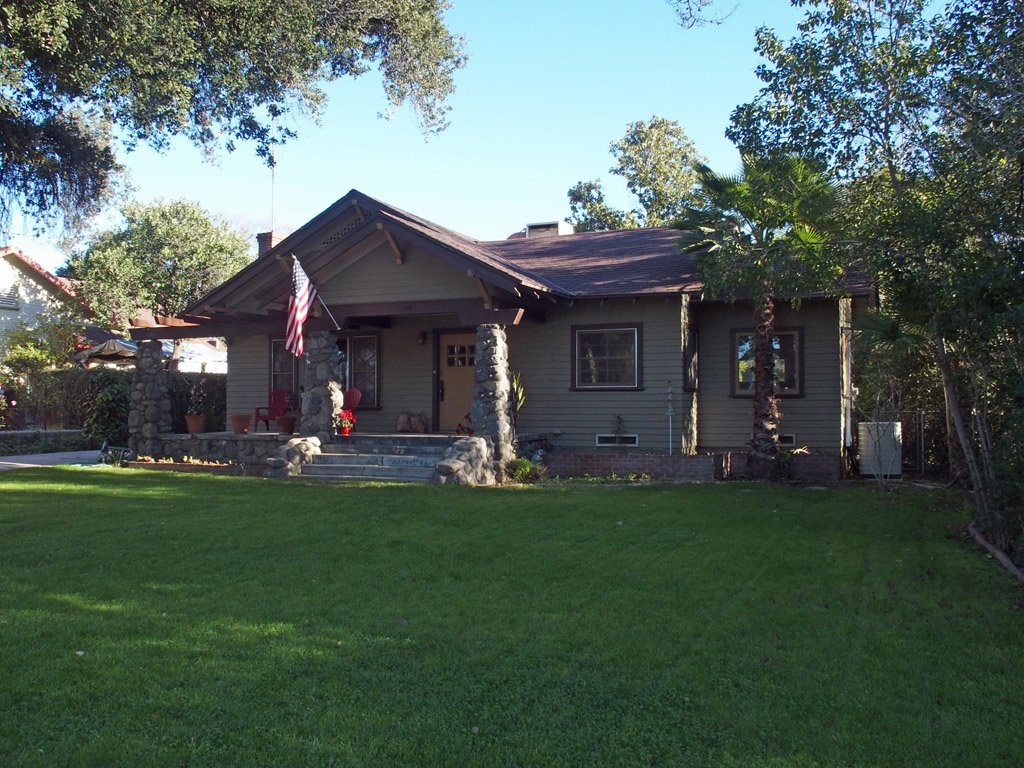 In 1910, J.E. Fairchild, prominent Redlands contractor and builder constructed this home in the Olive Avenue Tract for his son, Raymond E. and his new bride, Katherine. According to the original building permit the estimated cost of the five-room structure was $1800.

The wood clapboard sided home is a classic one-story California Craftsman bungalow of the period with its two gently pitched broad gable, across the front, unenclosed eave overhang with exposed roof rafters, full porch and three roof support rock piers. The gables are embellished with triangular knee braces and a lattice work gable vent. The front porch extends across the front with the portion under the right gable covered and the remaining porch trellises.

Raymond Fairchild and Katherine Holiday were married in May, 1909 and according to the Redlands Daily Facts it was quite a social event. Raymond’s occupation was listed in the city directories as a solicitor of Haight-Bethell, which sold fertilizers and packed fruit. By 1911, his occupation was listed as a real estate and insurance agent, honey broker, and Armour fertilizer agent. The Fairchilds would remain in the home until the late 1920s. For a short time, they remained in Redlands, but eventually moved to Pasadena.

By 1929, William J. Taylor and his wife Margaret were living in the home. According to the city directories, Taylor is listed as a bricklayer. The Taylors would remain in the home for several years.

William E. and Margaret Howard, who were recent graduates from the University of Redlands and newlyweds, purchased the home in 1940. Mr. Howard is a retired controller from Norton Air Force Base.

Today, the home continues to be beautifully maintained and landscaped by the Howards, who are to be commended for their stewardship of this Redlands historic resource.