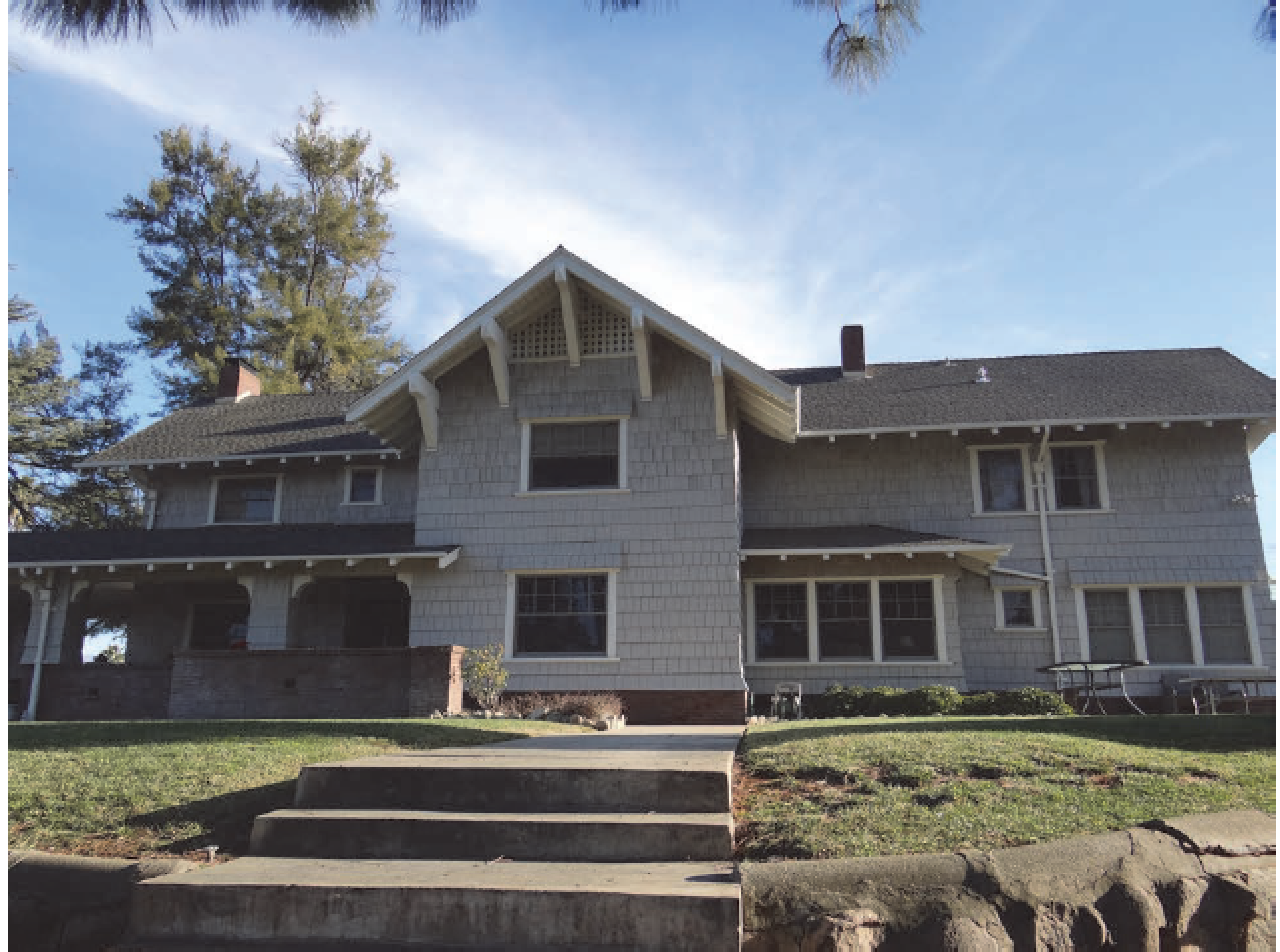 The Robert J. Dunn House, completed in 1912, is a 4,727 square foot, two-story, redwood framed, Arts and Crafts mansion with a rectangular plan, offset intersecting gables, and front and back porches. It has wood-shingled walls, an asphalt-shingled roof, brick chimneys, and brick porch piers. The structural foundation is poured-in-place concrete with a brick veneer. The interior of the house reflects the Arts and Crafts style in the millwork, hardwood floors, and built-in cabinetry.

The house was designed for Robert J. Dunn, a real estate developer and business owner, by the regionally renowned architecture firm of Hudson and Munsell led by Frank D. Hudson (1868-1941) and William A. O. Munsell (1866-1963), and was constructed by local builders, Albert Hoadley and William Berness. The house draws on the traditional examples of large-scale, shingle-style craftsman architecture, as evidenced by the various medium-pitched, gabled roof sections, decorative false beams and braces, and unenclosed eave overhangs. Dunn purchased the 7.05-acre property for $7,571.00 on October 16, 1909, and commissioned Hudson and Munsell in July 1910. The plans were completed in 1911, a building permit was obtained in March 1911, and the house was completed in 1912. Total construction cost was estimated between $7,000.00 and $10,000.00, one of the largest permits obtained in Redlands that year.

The first floor has formal living spaces and informal servant’s spaces and is trimmed with dark-stained, vertical-grain Douglas-fir and narrow, oak-plank flooring. The formal rooms include a reception hall, living room, dining room, and library. The informal rooms include the kitchen, breakfast room, and servant’s room. The formal reception hall displays a Douglas-fir cornice, large pocket doors that close off access to the living room and a smaller pocket door that closes off the dining room. The back entrance to the reception hall boasts French doors and hinged sidelights. A 64-inch wide, quarter-sawn, varnished oak staircase to the second floor completes the entry hall. The living room is accessed from the reception hall through two large pocket doors on the northwest side. This impressive room contains a Douglas fir cornice, exposed beams, four very large double-hung windows and a large artistically designed fireplace. The brick fireplace incorporates clinker bricks throughout and uses volcanic stones between the upper and lower wood mantles. The dining room retains an original hand-stenciled border above the wood cornice. Both the dining room and library showcase built-in cabinets with leaded-glass doors and drawers. As indicated on the original architectural plans, the dining room fireplace is finished in “old gold press brick” and the library fireplace is finished with “selected blue bricks.” The small breakfast room has a built-in buffet, six, 6-over-1 double-hung windows, and original Douglas-fir flooring. The entrance to the basement off of the kitchen is a utilitarian painted-wood staircase.

The staircase to the second floor continues the first floor oak theme and boasts large original, art-glass windows on the landing with original hardware that opens the transoms. It faces in a northeasterly direction toward the backyard. The second floor has a wide hallway leading to four large bedrooms, each with walk-in closets. There are two bathrooms with original features including claw-foot tubs, and a linen room with built-in cupboards for storage. There are original double-hung windows of various sizes scattered throughout the second floor rooms, as well as tiled fireplaces in two of the bedrooms. The entire second floor is finished in yellow pine with white enamel paint as indicated on the architectural plans. The doors are made of birch and three of the bedroom doors have “chipped glass” panels. The bedrooms have coved ceilings.

Prior to moving in, Dunn rented the property to F. S. Palmer for the winter of 1912/1913 and then to William S. Moore and his wife Edith, the daughter of Joseph Pultizer, for the spring. Dunn and his family occupied the house from the summer of 1913 until January 1915 when he then apparently traded the house to Elliott A. Moore for stock in City Transfer, a trucking company in Redlands. Ownership was briefly held by a banker, Bennett W. Cave, during the trade period.

E. A. Moore then leased the house to Kate Busch, the widowed, sister in-law of Adolphus Busch (founder of Anheuser-Busch), from 1915 to 1929. Moore then sold the house to Edward H. Sewall, heir to a ship-building fortune, and his family retained ownership until 1963. The Sewall family sold the house and grounds to the First Presbyterian Church of Redlands, which intended to demolish the house and build a church on the property. A few years later, however, a fire at the existing Presbyterian Church in downtown Redlands saved the Dunn House from the wrecking ball. After the 1967 fire, the insurance company required that the church rebuild in the same location and in 1978 the church sold the house and grounds to Kenneth and Janet Upchurch. During their ownership, the Upchurch family did some minor rehabilitation to the house, remodeled the kitchen and downstairs bathroom, and subdivided the property ultimately leaving the house on an approximately one-acre parcel. In 1989, they sold the house and surrounding lots to a developer that later remodeled the kitchen and rear hall and sold the house and the other parcels to new buyers over the next few years. John and Kathy Portwood purchased the house in 1994. They owned the house until 2014 when the current owners, Donn and Janet Grenda, purchased the property.

The Redlands Area Historical Society is pleased to present a 2017 Heritage Award to Donn and Janet Grenda.