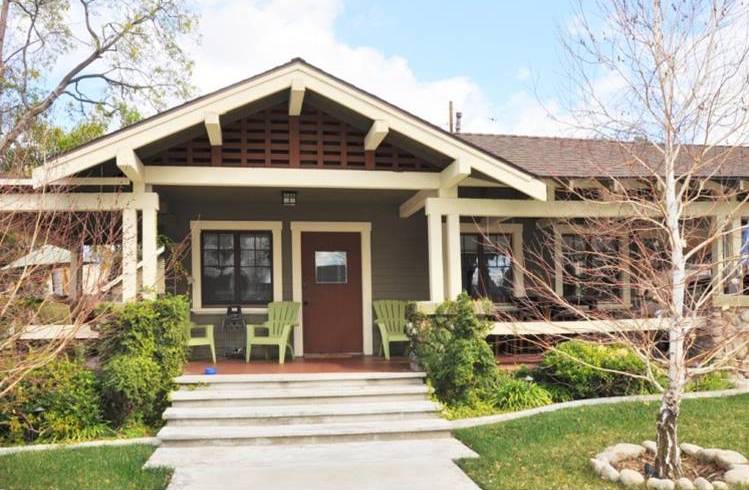 The home was built by A.M. Keizer and purchased by William and Julia Collett in 1922. They lived in the house for 35 years. The Collett’s moved to Redlands in 1902 from Ohio where Mr. Collett worked for a shoe manufacturing plant and was a shoe salesman. He became the gardener for, and 18 months later, foreman for the Albert Burrage Estate of 35 acres plus the polo field. While working at the estate for 7 years he went to school to study floriculture and landscape gardening. This prepared him to be on the Parks Commission for 11 years and on the City Planning Commission for 13 years. He was General Manager of the City Nurseries and planted most of Sylvan Park and the University of Redlands, except for the Administration building. As a businessman he served as president of the Chamber of Commerce and was the oldest member of the Rotary Club. Because of his interest in youth, he taught Sunday school at the Methodist church for high school boys and was Boy Scout Council Chairman for four years. Mr. Collett lived in Redlands for 65 years before his death in 1965 at the age of 86 and Julia passed away in January 1967 at the age of 89. Both are buried at Hillside Cemetery.

This home was built on two lots which allows for a spacious backyard with a swimming pool, pool house, and a large wooden deck. Opening onto this deck is a back door of small, square glass panes.  The medium gable roof, with a low gable over the front porch, has large lattice work vents. The building reflects the Craftsman style with exposed rafters, and double porch posts resting on rock piers. A porte cochere is on the south side of the house. The windows are double-paned, with four square panes above, and open in. The centered front door is of solid wood with a square glass pane at the top with beveled edges.

The Collett’s moved in 1958, and James Bullock and Jasie Belle Braswell purchased the home. They lived in the house until his death in 1977 at the age of 86. Mr. Braswell was a veteran of WWI and WWII serving 30 years in the U.S. Army and retiring as a Master Sergeant. Jasie moved to Yucaipa and died in 1989 at the age of 97. Both are buried at Hillside Cemetery.

The present owner, Bradley Johnson, purchased the bungalow, and moved in December of 2012. He has been employed by ESRI for 26 years and had wanted to move to Redlands from Corona for many years. After divorcing he decided to follow his dream and moved to Redlands in 200l. He rented a house on Normandy Court and started seriously looking to buy a home. What he liked about the Cypress Circle home was the wood features, old windows, and the large back yard with a pool, but most of all, the large front porch where he and the dogs can just relax. Plans for the home include checking the sub flooring and making the windows more efficient, but not replacing them.

The Redlands Area Historical Society is pleased that Bradley Johnson finally got his wish to have a home in Redlands that he loves and will cherish for many years to come.