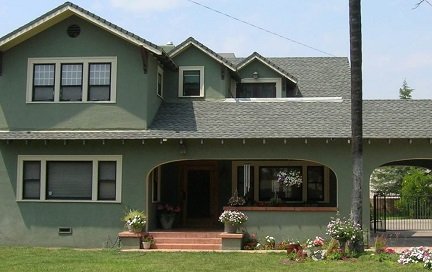 This north side Redlands property is located within Section 15, which is the heart of early Lugonia. The earliest subdivision of the Pioneer area was by homestead. We find the first information on this property not in the city records, directories or even the water connection record, but rather on historic maps dating from the mid to late 1800s. The original water source was the Berry Ditch, which is reported to have crossed this property, followed by well water and finally in 1930 by city water. County assessor’s records indicate the land that would become the Arth Ranch was part of the Tolles Drawing tract. Previous ownership included William and Jesse Prine, Martin Luther Lum (city civil engineer), Maryetta Lum, Joseph Craig, and FP and Mable Morrison.

Peter Arth Sr. was actually the third consecutive Peter we uncovered, and he was one of 11 children born to Peter Joseph and Elizabeth Deitrick Arth, both of German heritage. Elizabeth is said to have suffered from asthma and the family moved to Redlands for her health. When Peter Sr. and Elizabeth arrived in Lugonia in October 1891 they had 3 children with a 4th on the way. They spent one night in a hotel and then moved onto the first 10 acre parcel at the northwest corner of Texas and Pioneer. The Arths started building immediately and stayed in the barn until the house was ready. Their 4th child was born in November only a month after they arrived. The couple was hardworking and cautious, but strong supporters of the citrus industry and they expanded both land and groves. Peter Sr. became a city councilman in 1908, but died in 1910 a year after catching a lung infection while traveling to their former home state.

Peter Jr. was a small child and spoke only German when he first arrived in California, but he learned English fast in the Lugonia School. Peter Jr. married Alice Caroline Blomberg in 1911, and they added land, four children and a much enlarged house to the family holdings. By 1899, according to the USUS map the land that would become the Arth Ranch contained 7 grove and worker houses. One is the subject of this citation, the Peter Arth Jr. house which is now identified as 310 W. Pioneer. The 1920 census shows Peter Jr. living here with his wife Alice and his three daughters, Leona, Helen, and Barbara while his mother Elizabeth and sister Edna were still living in the original family home down the street, at 610 W. Pioneer. Another Peter would be born soon to Peter and Alice. Peter Jr. died at age 38 in the family barn, following an unfortunate smudging accident and so the city directory of 1927 lists both Arth women as widowed living in their respective homes on the combined Arth Ranch. The land and homes would remain in the Arth family for an additional period of time and was divided and sold to other families.

While we don’t know the exact date of the original construction of 310 W. Pioneer, we do know that it was enlarged at least 3 times and possibly as many as 5 or more. Clues to this expansion are evident today along the west side of the house where a former roofline is visible and in the basement where a cobble foundation with cut stone is present. We know from personal stories that the first structure was quite small, perhaps only a two room (hall or hall and parlor style) single story clapboard wood frame house with a stone lined root cellar. This was followed by the expansion of the house, the addition of a second story, additional expansion of the ground floor, expansion of the upper levels, and finally, the addition of the complex portico across the front.

Many of the interior walls are quite wide due to the inclusion of former exterior treatments. Some interior of cabinets and attic spaces enclose older materials and exterior color. As viewed today, the home has period paint selected for the property by a historic paint professional, a converted back porch allowing for an expanded kitchen space and family dining, a sleeping porch converted to a bedroom, the original garage, and a tennis court. It is known that a number of the residents who lived here played tennis including Helen Arth followed by Al Nuno, who occupied this home after moving from his parents’ home which was the original Arth Ranch home.

Architectural features include prominent gabled cascading dormers, protruding brackets, exposed rafters from open overhang eaves and coordinated light fixates. The front door and many of the newer interior doors and built-ins are constructed of blue gum eucalyptus for the beauty of the grain which the Arths adored. The stain glass window depicts an orange blossom. The Arths eventually owned more than 100 acres. Remnants of the ranch are located nearby and include a well house, cobbled stone weir, upright irrigation elements, a barn, a shed, and a windmill.

Todd and Carolyn, the owners for more than 10 years, celebrated their recent anniversary by contracting custom made wrought iron gates for the property. These coordinate nicely with the period lighting on opposing entry monuments.

The Redlands Area Historical Society celebrates the continued existence of a pioneer home and the loving care and treatment offered to it by the Lawrence family. It is our great pleasure to offer this 2014 award to Todd and Carolyn Lawrence in recognition of their evident love and devotion to this home.