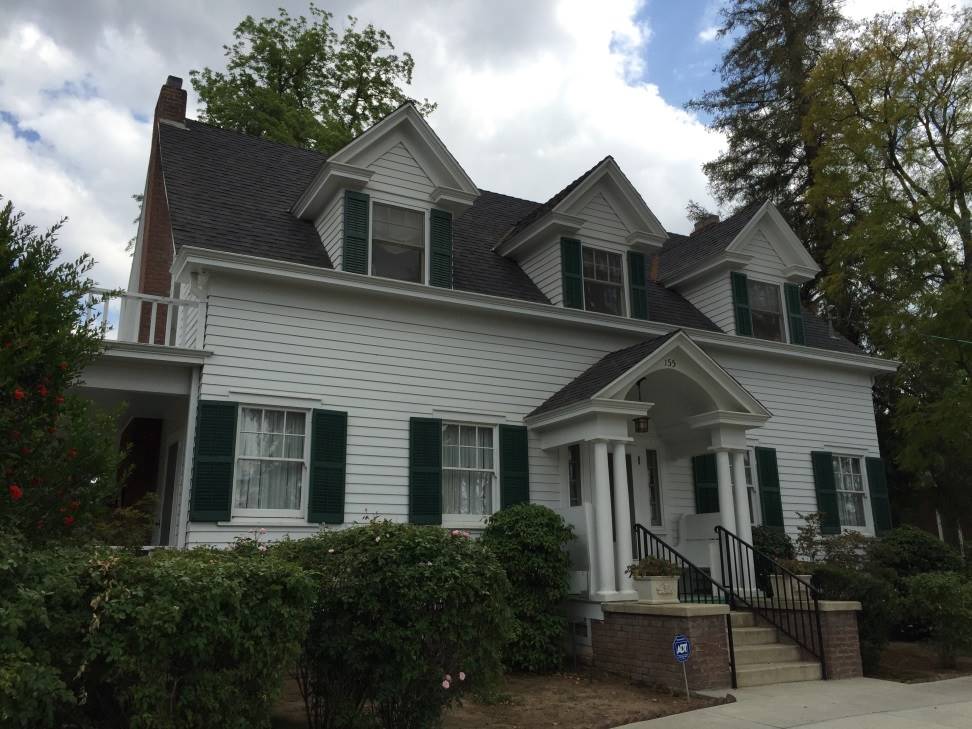 Richard Lincoln Leaverton, the son of Janette and Wilson Leaverton, was born in Pocahontas, Bond County, Illinois on December 20, 1866. He married Rosella Thompson Southwick (born Mar. 31, 1874, Sangamon County Illinois) on October 19, 1893. The Leavertons including eleven-year-old Hester Rosella moved to Redlands in August of 1912. They rented a house on Buena Vista and began searching for property on which to build a home.

The Redlands Review published two somewhat conflicting articles on the Leaverton family soon after their arrival. On December 21, 1912, it indicated that the Leavertons had purchased the remaining two lots on Alvarado Street south of Cypress from A.H. Holgate in the Third Addition Tract and planned to occupy the new home in June of 1913. However, a second article published on April 30, 1913, explained that Mr. Hizing would build them a home on Palm Avenue next door to Huge Montgomery. This article goes on to describe the plan to build an eight-room home in the colonial design.

We know from the county assessor records that the Palm Avenue property the Leavertons bought was a portion of the land then owned by Huge Montgomery resulting from a lot split. At that time, the property already contained a water source from a connection made in 1904 and it already contained a citrus grove. City directories from the time indicate Mr. Leaverton was a rancher; his wife was listed as a homemaker and his daughter as a student. The addresses were then the Leavertons at 55 West Palm and Huge Montgomery’s at 59 West Palm.

Richard Leaverton died in 1922, and Rosella and her daughter Hester continued to live in the home until well into the 1960s. Rosella died in 1969 and Hester a City of San Bernardino High School Art Teacher died in 1997. All three family members are buried in Block B, of the Redlands Hillside Cemetery.

The Leaverton Home displays a centered front door accentuated with a combination of the pediment, columns, and sidelights. The home is a two-story, rectangular building with paired extending chimneys on opposing ends constructed of plain brick. A curved multi-joined concrete brick edged driveway enters the property on the left, curves across the front of the home and then circles the right side to a detached garage in the back. A brick walkway enters the yard from the right via a small white picket gate with wire latticework.

A wide shaded packed earth path is located between the curb, and a rose lined wire and wood fence.  The lot is large and contains fruit trees, mature manicured shrubs, and large shade trees. The house overlooks the schoolyard across the street.

The home has simple, classic colonel revival detailing; a shingled medium pitched side sloped roof with three dormers. Double smooth surfaced classical columns support either side of the entry pediment. The front door contains 10 square lights, and a side light is present on either side of the door. The matching dormer and ground floor windows are double hung with multi-light shash at the top and single light or pane at the bottom. Simple flat heads top the ground floor windows under a minimal roof overhanging and corniced eave. Louvered shutters painted green have workable hinges and enhance the upper and lower windows.

The dormer cheeks are of the same beveled wood siding as the façade, and the matching dormer pediments complement the entry pediment which contains a smooth elliptical soffit. The entry is lighted with a single stained glass fixture suspended from an ornate chain.  Matching fixtures are present on the balconied side porch. The square green painted concrete front porch contains a facing wooden bench on either side of the door.

Jon and Cynthia Hoghaug purchased the home in 1998 from Hester Leavertons heir making them the third owner, but effectively the second family to occupy the residence. Immediate projects at the time of purchase included repairs to a leaking roof and new paint. Over the years, they have remodeled the kitchen and replaced the driveway. All improvements made consider Ms. Hesters likely approval as Cindy understand Ms. Hester was a lady who knew her mind and was willing to share her opinion of how things should be done at her home. Many of the landscape items were purchased from the Dangermonds, and when advised they would likely not grow in the environment, Ms. Hester often proved it would grow in her yard. As years passed, Hester lost her eyesight and her ability to garden. Concerned neighbors and friends brought her flowers and told her they came from her garden so that she would not be distressed by the declining condition of the property.

The obvious care and devotion shown to this home are inspiring and heartwarming. It is my pleasure to present this 2016 Redlands Area Historical Society Heritage Award to Cynthia and Jon Hoghaug in recognition of their obvious love and affection for this beautiful Redlands home.