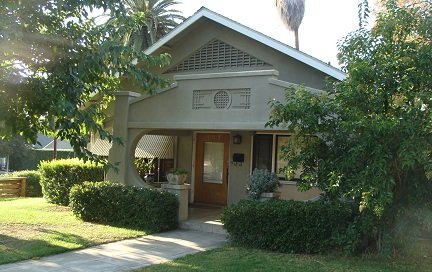 Lee and Mildred Johnson contracted builders Reynolds & Smith to construct this charming sepia-colored bungalow in the subdivision of Atwood & Ford in 1924. An article in the Redlands Daily Facts in December of that year noted the groundbreaking of both this residence and the one directly across the street at 106 E. Fern. They were constructed for $5,400 and $2,200 respectively. The article boasted that these two new projects had made a grand total of $43,000 in recent months for this prosperous developer.

We do not find the Johnsons living at this address for any length of time – or at all. Given the spirit of the housing speculation of the time it is probable that the house was simply flipped: built and sold for profit. Directories and permits account for a Thomas J. and Mary Gaines residing at this address prior to 1927. Mrs. Gaines was noted as one of the first women to receive a music degree. She earned her A.B. from Mary Sharp College in Winchester, Tennessee.

An investment of $5,400 was considered relatively high for a five room cottage in the early to mid 1920’s. But this well-constructed and well-appointed bungalow appears worth it. Typical of the Arts & Crafts movement by which this home was inspired, it features many thoughtful built-ins with naturally finished woodwork throughout.

The free-flowing floor plan (another signature of Arts & Crafts) includes a breakfast nook, a mudroom and a generous bathroom. Doors, partitions and a hallway that closes off and opens up traffic to and from the kitchen, dining, living room, and bedroom area when needed are a noted improvement from the simple room-to-room plans of earlier cottages. The home would have been thought of as forward thinking for these interior spaces, and for its unique exterior design.

In many respects, this is a generic California Bungalow with its medium to low gabled roof, wide, open eaves, the naturally textured “sandbag” stucco, and thick geometrical shapes of its wall surfaces. However, it suggests something else – a Spanish, Moorish, Far Eastern, or even a “Tut Aztec” influence if you will. The inner eye sees all these romantic styles, yet cannot quite name it. It is an eclectic composition of all these elements creating a style of its own, which makes for a pleasing head-turning curb appeal.

The unusual and striking treatment of the porch makes the first impression. It echoes something more exotic with the half-moon cutouts at the thick pillars and make-believe buttresses there, at the west end of the front wall, and at the arched side gate at the east end. The parapeted roofline has in it an insignia – a vented relief in the pediment – which is then subtly copied in the pattern of the gate in the natural wood fence that encloses the front and side yards. There is a large latticed triangular shaped vent in the front gable of the house with two more vents in the shed dormers on the west rake of the roof.

A covered breezeway connects the house with the garage which was built in 1950 by then owner Bland Haydon, a retired optical technician, for $700. Its design kept the motif of the house: stuccoed and gabled with the same roof and most likely clad with milled wooden shingles. A water hook-up was found in 1905, but no structures were recorded built or seen on early Sanborn maps, although these maps do show a building at the north end of the property which was parceled off to become 333 Nordina.

The Redlands Area Historical Society is pleased to present this award to the owners, Mr. and Mrs. Ibold. Since they bought their home in 2008 they have taken a lot of pride in their unique “Hobbit” house. It shows much appreciation and care taken to conserve the original integrity of this architectural gem.