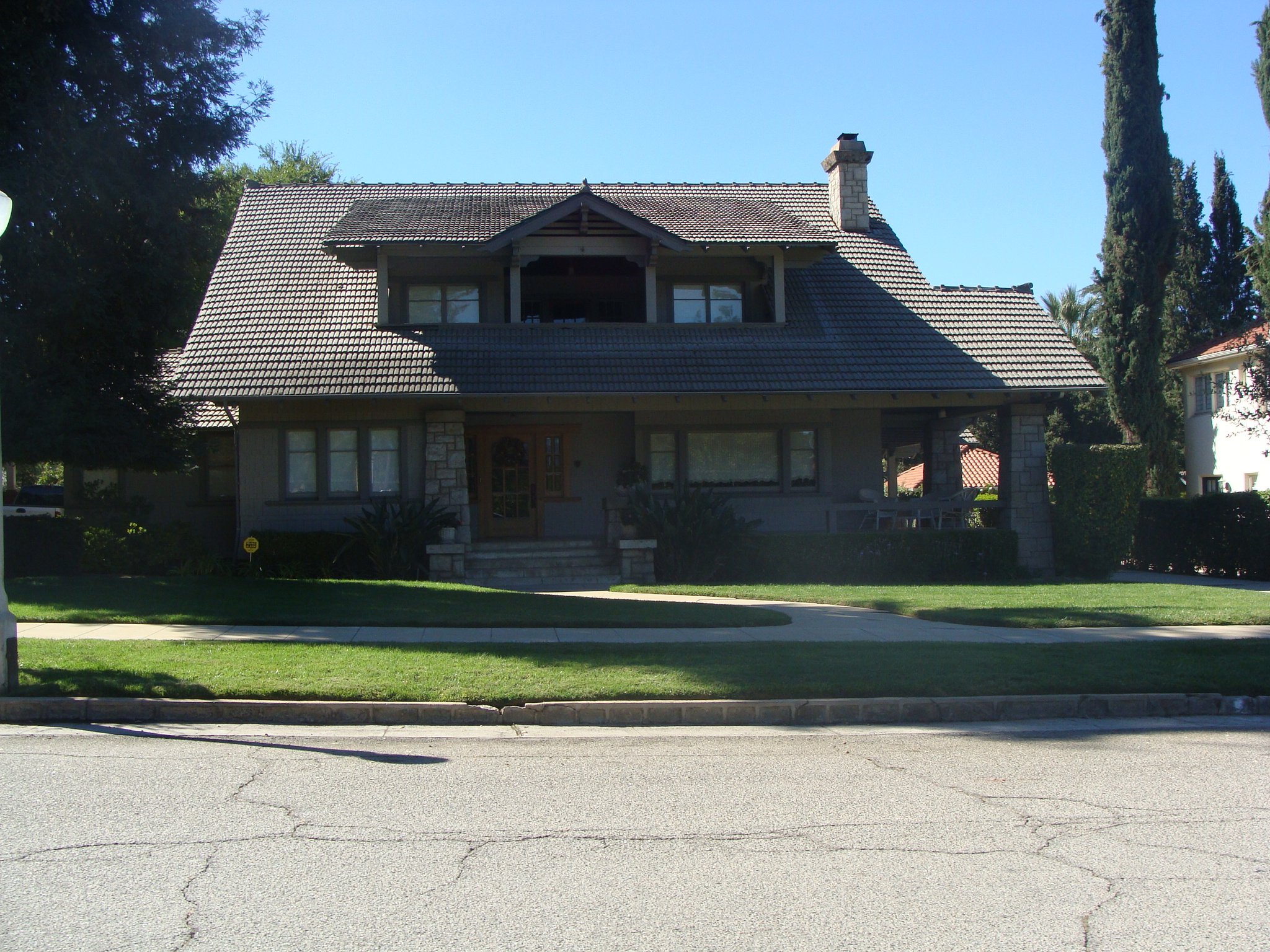 In June of 1911 the land at 610 Alvarado Street was purchased from Gertrude A. Hayes for the sum of $2,000 by Wallace C. Nickerson. Later that summer, Mr. Nickerson was issued a building permit for a home to be built on the property. The permit called for a home which would be approximately forty by fifty feet, have two stories and cost around $5,000. The architect requesting the permit was listed as Robert Ogden. Mr. Nickerson, who contracted the project himself, turned Mr. Ogden’s design into a delightful gem of a house in the craftsman style with just a hint of oriental influence. This influence can be seen in the horizontal planes of the house and in the almost pagoda like upper porch roof and supporting bracketed columns. All roof surfaces are covered with clay tile and have sculptured ornaments on the gable points. The gabled roof extends to the first floor and has projecting eaves with exposed rafters. The body of the house is covered with wooden shingles. The chimney, porch supports and foundation are hand-cut stone. The window configuration in both stories continues the strong horizontal influence with the windows often coming in groups and having horizontal trim and sills.

The Nickerson family left a lumber business in Minnesota when Wallace was fifty years old and moved to Redlands. Upon reaching California, Mr. Nickerson went into the orange growing business. Along with Mr. Nickerson came his wife, Anna, and his four children: Harold, Leigh W., Ted and Alice. After the deaths of Wallace and Anna sometime in the 1920s, Leigh and Mabel Nickerson and their family along with the maiden Alice Nickerson moved into the house. “Aunt Alice” lived in the downstairs suite of rooms and Leigh and Mabel with their three daughters used the upstairs bedrooms. Leigh Nickerson’s business was also orange growing and his hobby was horses which he kept at one his orange groves. He raised Morgans and was active in the Redlands Mounted Police. Mrs. Nickerson was a housewife and was active in the Women’s Club, the Y.W.C.A, and as a volunteer in the “House of Neighborly Service,” the Canteen during World War II. Aunt Alice taught school for many years in Redlands, Crafton and Lugonia and was principal of McKinley Elementary School. She lived in the house until she died at the age of 95 in 1982. Several owners have passed through the house since Alice’s death, making very few changes either to the house or its surroundings.

It was purchased by John and Elaine Alexandres in August, 1989. Since that time the Alexandres have worked diligently to restore the dignity the house had at its conception in 1911. The exterior has been painted, the garden renewed and the interior thoughtfully restored. The latest room to receive their attention is one of the upstairs bedrooms which will soon become a nursery.

We commend the Alexandres for their sensitive restoration of this important historic property.