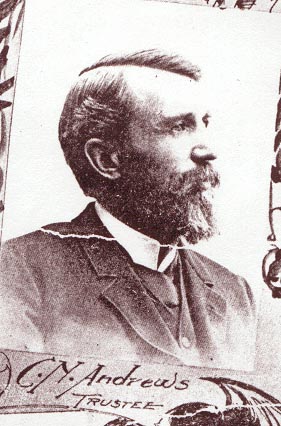 The nativity of C. N. Andrews dates back to 1852, in the state of Ohio, but, for all practical purposes, he is a native Californian, having come to this state when only five years of age.  The train in which his parents traveled on the overland journey was the second one behind the one that furnished victims for the Mountain Meadow massacre.  The train immediately preceding had also been attacked by the Mormons, but had repulsed them, and, joining forces, the two had passed on together in safety.  The earlier years of Mr. Andrews’ residence in California, were passed in San Francisco and its vicinity.  In 1876 he came to Santa Ana, and, until 1887, was engaged in teaching, as superintendent of city schools in Santa Ana, Riverside and San Diego, and was also a member of the county board of education in each of the three counties where he taught.

Coming to Redlands in 1887, Mr. Andrews, as a member of the firm of Andrews Brothers, lumber dealers, at first furnished a great deal of the lumber of which this city was built.  Afterward he devoted all of this time to his horticultural interests, as an orange grower, as president of the Mt. Carmel Fruit Company and, more recently, as president of the Redlands Preserving Company.  Mr. Andrews was a member of the first board of trustees of the city.  In 1883 he was married, at Los Angeles, to Miss Jennie E. Davis, a native of Oregon.  They have only one child, an adopted daughter. 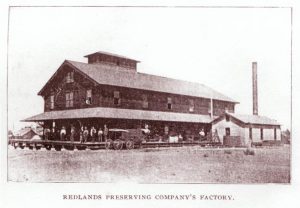