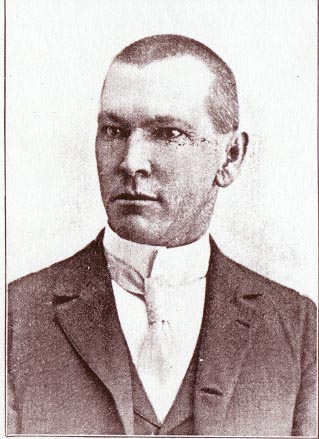 John W. Wilson is a native of Maine and was born in Gardiner, August 25, 1858.  He was graduated from Bowdoin College in the class of 1881 and, after his graduation, entered a wholesale hardware house at Portland, where re remained until 1886, becoming the junior member of the firm after about a year.  Mr. Wilson was married to Miss Jennie C. Haskell, of Topsham, Maine.  They have two children, Marguerite, now nine years of age, and John Sanford, both of whom were born in Redlands.  Mr. Wilson came to Redlands in October, 1886, and in April of the following year entered the First National Bank as cashier, which office he still holds.  He has also been secretary and treasurer of the Savings Bank of Redlands since its organization, and is treasurer of the Redlands Chamber of Commerce.

Mr. Wilson has always been an enthusiastic member of the Redlands Orchestra, which was started in May, 1888, under the leadership of H. L. Sloan.  Mr. Sloan was a musician of rare abilities, possessed of a phenomenal voice, a thoroughly refined and cultivated ear and a mastery of technique.  He had sung in concerts with the Thomas orchestra and had been a member of other first-class musical organizations.  His example and teaching were of great value to the Redlands orchestra at the outset, and it has developed into the largest and best orchestra in Southern California outside of Los Angeles.  It consists at present of sixteen members, four of whom, Messrs. H. B. and J. W. Wilson, C. H. Hobart and M. F. Pierce, were members when it was organized.  On one is eligible who is not a lover of music for its own sake, willing to play without pecuniary reward and to attend rehearsals rain or shine.  Rehearsals are held once a week, except throughout the summer vacation, and one year the orchestra made a record of 51 weekly rehearsals.  The result of the enthusiasm and hard work of its members has been to make this association not only a source of great enjoyment to the lovers of music in Redlands, and a credit to the city, but an excellent school as well for young players of unusual promise, of whom it has developed several.  One, at least, of these is at the present time studying the violin in Europe.  Music loving people appreciate the advantages to their children of such an educational force, which not only maintains high ideals of its art but lives up to them in practice, and the value of this organization to Redlands will be ever greater in the future than it has been in the past.