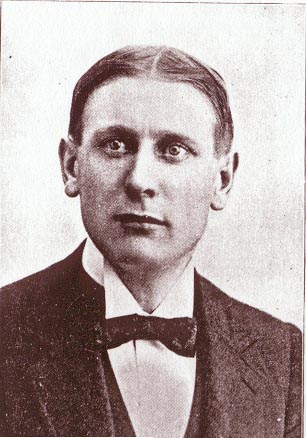 J. J. Boberick, proprietor of the Vienna Bakery, is a native of Iowa, and was born in Iowa City, July 31, 1872. He lived there until 18 years of age and received a common school education. Mr. Boberick learned his trade as a baker with I. C. Works, in Chicago, and afterwards followed it in several large cities, east and west, including Boston, Omaha, Denver and Kansas City. He came to San Francisco, to attend the Mid-winter Fair, March 20, 1894.  From San Francisco he went to Los Angeles and afterward came to Redlands, arriving in this city August 10, 1894.  For three years Mr. Boberick was employed in Bush’s bakery.  After this changed hands he started into business for himself, July 8, of the present years.  He has fitted very complete and handsome rooms at No. 13 East State Street, does all of his own work and makes a specialty of catering.  He has recently purchased a first-class baker’s delivery wagon which is upon the road every day supplying his patrons, with J. H. Sylvester as driver.

Mr. Boberick’s establishment is a model of neatness and cleanliness.  He carries a large line of staple goods and can supply his customers with anything, plain or fancy, that they care to order.  He is a thorough master of his craft and the products of his skill are always appetizing and satisfactory.  Upon the principle that “the proof of the pudding is in the eating” they commend themselves.

The first establishment of this kind in Redlands was the Model Bakery, which opened in the Hamilton building on the northwest corner of State and Fifth streets, October 31, 1887.  All the cooking, however, was done with a range and no attempt was made to secure family trade.  Housewives and outside bakeries furnished the general supply until Dec. 1, 1889, when Frank Weber completed the first regular baker’s oven.