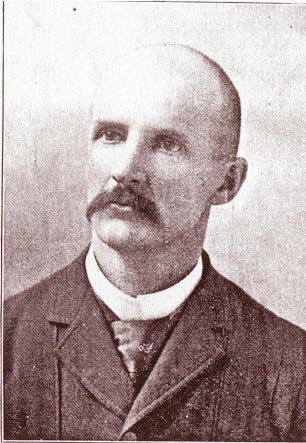 Walter C. Butler, who was born in New Haven, Conn., in 1855, and died at Redlands January 4, 1895, is held in very kindly remembrance by the large number of citizens of this place, who knew and respected him.  Mr. Butler was a graduate of the Sheffield Scientific School, of the class of 1876, and came to Redlands, in 1879, to follow his profession of engineering.  He was assistant engineer with F. E. Brown in the construction of the Bear Valley dam, and remained with the Bear Valley Irrigation Company until after the completion of its pipe line to Allesandro, in 1893. Later he was chief engineer for the Redlands Electric Light and Power Company, having charge of all its work in Mill Creek Cañon, and was employed by this company at the time of his death.

Besides these greater enterprises, Mr. Butler was engaged in many lesser importance in Redlands and its vicinity.  He planted the Brockton Tract, in 1883, and had charge of it until he entered the service of the Bear Valley Company.  He was engineer of the Mound City pipe line and laid out the extensive Drew ranch, near Mound City.  He was a brother of Mrs. Harvey Hewitt.  The marriage of Mr. Harvey Hewitt and Miss Butler, on March 18, 1884, was one of the earliest among the residents in this section of the valley, and Mr. Hewitt’s father, I. L. Hewitt, has one of the largest improved ranches in this vicinity.

Mr. Butler made the first experiments in Redlands in the canning of fruit, in the year 1885, having an establishment on a ranch belonging to him on Lugonia Avenue, where he put up in glass jars some of the finest fruit grown here, showing the superb quality of the deciduous fruits of Redlands.  Mr. Butler was reserved in manner but an entertaining conversationalist on occasion, a man of excellent ideas, wide reading and a splendid memory.  Very generous and with high ideas of honor and integrity, he made all his acquaintances his friends, and his death at an early age was more than a passing grief to an unusually wide circle.