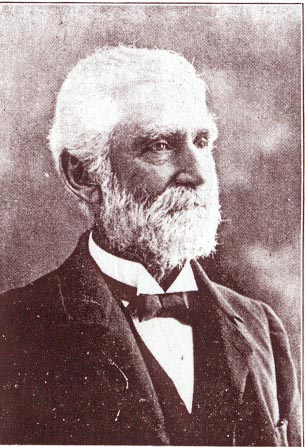 Harvey Clark has passed through a varied business career from the farm at Westfield, N.J., where he was born in 1823, to the beautiful ten acre ranch, which he now occupies in Redlands.  He is of English descent.  He spent the first twenty-two years of his life at Westfield, farming and engaged in the tanning business.  Then, with his savings of $200, he went to Piqua, Ohio.  Much of this journey was made by canal, the Erie from Albany to Buffalo, and the Miami canal from Toledo to Cincinnati.  This latter trip was in the first packet that passed over the Miami canal in July, 1845, and it consumed three days in the journey from Toledo to Cincinnati.  At Piqua Mr. Clark was a grocer, wholesale and retail, a manufacturer of threshing machines and interested in quarries.  He was a member of the city council and school board and at one time mayor of the city.

He came to Redlands in 1892 and purchased the property which is his home at present.  He is a member of the Methodist church.  In 1849, he married Miss May J. Kitchen, a native of Piqua, who bore him six children.  August 9, of the present year, Mrs. Clark died suddenly of heart disease, at a camp meeting held near Urbana, Ohio, while on a visit east with her husband.  At the present writing it is Mr. Clark’s intention to return to Redlands, where some of his children are living and where, after traveling at different times, over a large portion of the United States, he is content to pass the remainder of his life.