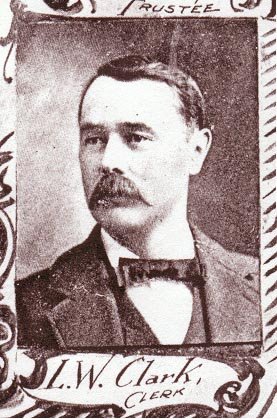 L. W. Clark, city clerk, was born at Centreville, Mich., March 6, 1854. While he was still a little boy his father died, and, after his mother’s marriage to F. W. Daniels, the family moved to Kansas during the exciting times of the civil war, and were obliged to return after a stay of two years. The remaining days of his boyhood were spent at his birthplace, where he was educated in the public schools and at the University of Michigan, at Ann Arbor, where he worked his way through, completing the course in ’77.

Mr. Clark taught school for several years in intervals of other business, finally returning to Kansas, where he was married to Miss Mattie Foster, in Jewell county, July 11, 1883.  Making Emporia, Kan., their home he was engaged in the cattle and loaning business until 1887, when he came to California in company with his brother, H. H. Daniels.  Arriving in Colton they hired a livery to visit Redlands and were so impressed with the settlement and its outlook that they sent the rig back and remained, opening a real estate office in Lugonia, on the corner where the residence of R. E. McGinnes now stands. In November, 1888, Mr. Clark was elected the first city clerk of Redlands, which position he has since held.  He also served a term as trustee of the Redlands grammar school.